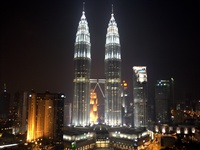 Malaysia's Prime Minister Najib Razak told a news conference that he has been told by the company that this is the largest direct investment in Canada by any country. Najib jumped the investment figure during a joint meeting with Canadian Prime Minster Stephen Harper in Putrajaya, saying only that Petronas has committed to construction of a liquid natural gas plant in British Columbia and the pipeline to feed it.

Later on, Najib and his Canadian counterpart left Malaysia to attend the annual APEC summit of Pacific Rim leaders.

Harper, however, did not refer directly to Najib's remarks about the Petronas investment.

Harper arrived in Bali for an Asia-Pacific leaders' summit on Sunday.

Petronas expects to make a final investment decision in late 2014 on whether to proceed with the BC LNG project.

Greg Kist, president of the Pacific NorthWest LNG project – 90-per-cent owned by a Petronas subsidiary – estimated there will be up to 3,500 construction jobs created to build the LNG plant in northwestern BC, and 200 to 300 permanent full-time jobs at the facility once it opens by early 2019.

Japan Petroleum Exploration, which is slated to be a buyer of BC's LNG, has a 10-per-cent stake in the Pacific NorthWest LNG project.

LNG fetches a hefty premium in Asia, and British Columbia is positioned to benefit. ''This is about increasing the value of a Canadian resource,'' Kist said.

Kist said the LNG proposal will also be reviewed by the Canadian Environmental Assessment Agency.

''The BC Environmental Assessment Office is working closely with CEAA,'' he said, adding that no further approvals are required from an investment viewpoint since Ottawa has already approved Petronas's acquisition of Progress.

Several other LNG projects are being proposed in BC, and their proponents are awaiting details from the BC Liberal government about what the rates will be for a planned LNG export tax.