Kazakhstan could edge out Oil & Natural Gas Corp (ONGC) to buy ConocoPhillips 8.4-per cent stake in the giant Kashagan oilfield, only to sell it to China's state-owned Cnooc or Sinopec, according to the Kazakh oil and gas minister. 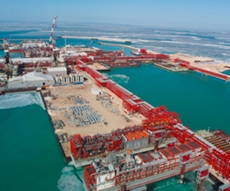 The move will come as a big blow for ONGC, which recently woke up from a deep slumber and started making big-ticket overseas acquisitions.

The ONGC deal is subject to Kazakh government approvals as well as the pre-emption rights of Kazakhstan and other stakeholders in the Kashagan oil field, which is jointly controlled by state-run KazMunaiGas and six international companies, including Eni, ExxonMobil, Inpex Corp, Royal Dutch Shell, and Total.

The Kashagan partners had two months to exercise their pre-emption rights, which expired in late January, but the Kazakh government has till 25 May to decide on the deal.

"A Chinese company acquiring the stake in Kashagan, will boost the volume of crude to be shipped to China'', Mynbayev said. Kazakhstan has sounded out the Kashagan partners about bringing one of China's state-run oil companies as a partner in the project.

According to analysts, state-owned China National Petroleum Corp known as Sinopec or Cnooc, may be the eventual buyer.

Kazakh President Nursultan Nazarbayev, who has been in office since the country gained independence in 1991, had on 6 April met his Chinese counterpart Xi Jinping and the head of Sinopec, offering access to resources in exchange for investment into the Central Asian economy, the report added.

Discovered in July 2000, the Kashagan oil field in the Caspian Sea has been described as the largest field found in the past 30 years and the largest outside the Middle East, which will cost around $136 billion to develop.

The field, located in shallow depth of 5-8 metre, is estimated to hold around 38 billion barrels of reserves of oil, of which 13 billion are proved to be recoverable, and 18 trillion cubic feet of gas.

The project is the largest but most complex hydrocarbon development currently being undertaken anywhere in the world, and the consortium has spent an estimated $47 billion in the first phase of development.

The start-up of the project has been delayed since 2005 due to cost overruns and disputes with the Kazakhstan government over taxes.

The project partners are also waiting for the Kazakhstan government to approve the estimated $100 billion cost of the project's expansion and have demanded an extension of 20 years of the production-sharing agreement in order to give them more time to recover their investment due to multiple delays and cost overruns over the past decade.

The development of Kashagan represents several technical, supply chain complexity, safety, engineering logistical, environment challenges, high pressure reservoir with dangerous levels of hydrogen sulphide, making it one of the most complex hydrocarbon development currently being undertaken anywhere in the world.

First production from the Kashagan field is now expected in the second quarter of this year.

Through the deal, OVL expected to ramp up its average annual oil production by about 1 million metric tonnes per annum (mtpa) for a period of over 25 years with a peak capacity of about 1.6 mtpa from phase 1 of the operation and significantly increase its share, when phases 2 and 3 of the project become operational.

ONGC already has a working relationship with KazMunaiGas since both companies have an agreement in place to explore a large block in the Caspian Sea.

Although India has good relations with Kazakhstan, the former Soviet nation is China's biggest trading partner. Its trade with China is almost $28 billion and has the potential to grow further, according to analysts

China has offered Kazakhstan billions of dollars in loans for infrastructure projects. China is building a new railroad across the country and an oil pipeline connecting both countries.

Through direct investments and taxes, China and its state-owned energy companies have invested $13 billion in Kazakhstan, with most of it in the energy sector. Chinese companies control 22.5 per cent of Kazakhstan's oil output.

According to a recent report, the share of Chinese companies in the Kazakhstan's hydrocarbon industry will exceed 40 per cent by end 2013, although such reports are difficult to authenticate due to the opaqueness in some deals done by the Chinese in Kazakhstan's oil and gas industry.

Some of the oil blocks are held by relatives of the Chinese party bosses, or top and middle-level governmental officials, who have no qualms of shipping their share of the oil to Europe instead of their home country.