Chesapeake Energy to sell pipeline system to affiliate for $865 million 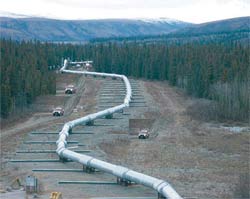 Chesapeake, the second largest natural gas producer in the US, is selling Appalachia Midstream Services, which owns 47 per cent of a 200-mile gathering pipeline system and other gas-gathering assets in the Marcellus Shale formation.

The pipeline transports more than 1 billion cubic feet of gas a day and has 15-year contracts with gas producers.

The acquisition makes CHKM the industry's largest gathering and processing master limited partnership as measured by throughput volume, said CHKM in a statement.

The acquisition, which is expected to close by 30 December 2011, will be financed by $600 million of cash drawn from CHKM's revolving credit facility and equity consideration of $265 million.

Oklahoma City-based Chesapeake, one of the most aggressive buyers of acreages in North America, needs funds to drill and make acquisitions next year.

The company plans to raise $7 billion in next year through joint ventures and may hive its stakes in Chaparral Energy FTS International.