New Delhi: In a major breakthrough for this energy-starved nation, state-owned Oil and Natural Gas Corporation (ONGC) said yesterday it had struck natural gas reserves in its maiden well drilled to tap shale gas in West Bengal. This is the first such discovery in sedimentary shale gas rocks outside the United States and Canada.

"ONGC created an exploration landmark when gas flowed out from the Barren Measure shale at a depth of around 1,700 meters, in its first R&D well RNSG-1 near Durgapur at Icchapur, West Bengal," the company said in a statement here.

The well is still under assessment.

Shale gas is turning out to be a major source of unconventional energy and already contributes nearly 17 per cent of the total gas production in the United States. 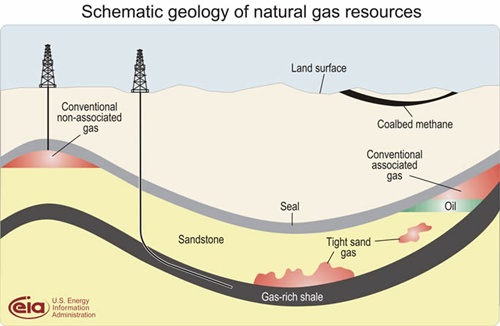 Initial studies in the country have indicated promising shale sequences in well explored basins like Damodar, Cambay, and Krishna Godavari and Cauvery basins. Their commercial viability is currently being assessed.

ONGC decided to explore the Damodar Basin first as it was already working there for Coal-Based Methane projects. The Damodar Basin has some natural advantages given the shallow nature of its shale formations, and abundant water availability. Water is a pre-requisite for doing massive hydrofracturing.

Hydrofracturing is a well development process that involves injecting water under high pressure into a bedrock formation via the well in a bid to extract natural gas from previously impermeable shale.

Also known as Hydraulic fracturing the process utilizes millions of gallons of water, sand, and chemicals injected at high pressure into horizontally drilled wells, some as far as 10,000 feet below the surface. The pressure causes the shale to 'crack'. These cracks or fissures are held open by the sand particles and chemical propants, which then allow the natural gas to escape from the shale and to the well.

The R&D project, which involved drilling of four wells in Damodar Basin -- two wells in Raniganj sub-basin in West Bengal and two wells in North Karanpura sub-basin in Jharkhand, was operationalised with the help of Schlumberger.

"The estimated expenditure is about Rs168 crore and the total project is expected to be completed within 520 days," ONGC said.