The US consumer Electronics Show  (CES) 2014 was all about smart, smart appliances, smart watches, smart bracelets and even smart door locks, the brain child of Gabriel Bestard-Ribas who was tired of the keys in his pocket scratching the screen of his smartphone. The only way to keep that from happening, he thought was to combine the two. 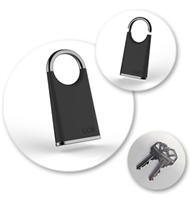 Bestard-Ribas, founder and chief executive of San Francisco startup Goji, said at CES 2014 his keys were always scratching his phone so he wondered why they could not be built in.

He went on to create what he called 'Goji' smart lock that would not only get unlocked when it sensed the user's smartphone near it, but would also greet them by their name.

The contraption works through Bluetooth connectivity. Once users had Goji smart lock installed on their door and a free app on their smartphone, they were all set to lock away the door of one's room / cabinet / locker and keep one's possessions out of reach of intruders. And on return, the lock sensed the smartphone and unlocked the door automatically.

But that is not all, the Goji lock also comes with a built-in camera that snapped pictures of all those who came while the owner was away.

The invention fuses mobile internet technology with centuries-old lock mechanics. A free Goji application installed in smartphones uses Bluetooth connectivity and allows the clock to detect whether a person was in the vicinity and, whether the individual was a resident or someone who had a "digital key".

On authentic identification a personalised welcome message is displayed and the door is opened.

Images of visitors as also alerts regarding entry are sent to smartphones of residents over  home wireless internet connections.

According to Bestard-Ribas, it was about allowing one to feel confident and have control over one's home access. He added, losing keys or handing them to someone who left one's sight was all too common an experience, and it was not possible to know if copies had been made.

Temporary digital keys, with restriction over set time periods, could be e-mailed to house cleaners, dog walkers or others who might need to visit homes. The locks come with a price tag of $299 and would be available online from March.