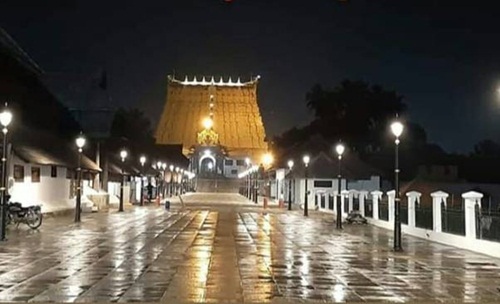 The project is being implemented under the Swadesh Darshan scheme of the tourism ministry.
The project, ‘Development of Spiritual Circuit: Sree Padmanabhaswamy Temple-Aranmula-Sabarimala’, was sanctioned by the ministry of tourism in 2016-17. Majority of the work under this project has been carried out at the Sree Padmanabhaswamy Temple.
The Sree Padmanabaswamy Temple is one of the 108 divyadesams of Lord Vishnu. The temple witnesses huge footfall throughout the year. However, the temple precinct did not establish a sense of arrival to the revered destination nor were the amenities sufficient to cater to the tourists. Under this project, the ministry has developed and rejuvenated the temple and its surroundings keeping in mind the factors of heritage and socio-cultural aspects.
In Thiruvananthapuram, the PM will visit the Padmanabhaswamy Temple. He is likely to unveil a plaque to mark the launch of some visitor facilities.
Swadesh Darshan scheme is one of the flagship schemes of ministry of tourism for development of thematic circuits in the country in a planned and prioritised manner. Under this scheme the government is focussing on development of quality infrastructure in the country with the objective of providing better experience and facilities to the visitors on the one hand and on the other fostering economic growth.
The scheme was launched in 2014 -15 and as on date the ministry has sanctioned 77 projects worth Rs6,131.88 crore to 30 states and union territories. Major components of 30 of these projects are expected to be completed during the current financial year, of which 10 projects worth Rs834.22 crore, covering the states of Manipur, Meghalaya, Nagaland, Arunachal Pradesh, Andhra Pradesh, Madhya Pradesh and Chhattisgarh have already been inaugurated.
In view of the tourism potential of Kerala, the tourism ministry has sanctioned seven projects in Kerala under the Swadesh Darshan and PRASHAD schemes for an approximate amount of Rs550 crore.
The prime minister will inaugurate the Kollam bypass on NH-66.  It is a 13 km long 2 lane bypass, with a project cost of Rs352 crore. It includes three major bridges over the Ashtamudi Lake, having a total length of 1,540 metres. This project will reduce travel time between Alappuzha and Thiruvananthapuram, and will also decongest traffic in Kollam town.
MORE REPORTS