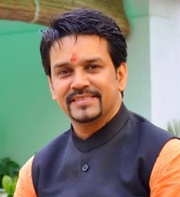 Board of Control for Cricket in India president Anurag Thakur and its secretary Ajay Shirke were sacked by the Supreme Court today for failing to implement the reforms suggested by the Lodha Committee.

The BCCI will now have an observer, who will be appointed on 19 January, to oversee its affairs.

Meanwhile, the BCCI vice-presidents have to give an undertaking that they will abide by all the Lodha Committee recommendations. The BCCI has five vice-presidents – M L Nehru (North Zone), Dr G Gangaraju (South), Gautam Roy (East), T C Mathew (West) and C K Khanna (Central).

The Supreme Court bench comprising Chief Justice T S Thakur, Justice A M Khanwilkar and Justice D Y Chandrachud has said all Lodha recommendations must be implemented and this means that all cricket administrators over 70 years old will have to resign.

''I don't regret anything. I don't have any ambitions,'' Shirke said reacting to the apex court ruling. ''I hope the new administration runs the BCCI well.''

''This is the logical consequence. Once the recommendations were accepted by the court, it had be implemented. There were obstructions, there were impediments ... obviously this had to happen, and it has happened,'' former Chief Justice of India R M Lodha, the chairman of the Lodha Committee, said after the court order.

''The Supreme Court itself has ensured that its order of 18 July is now enforced. It's victory for the game of cricket and it will flourish. Administrators come and go, ultimately it is for the game.''

The judges have also issued a contempt notice to Anurag Thakur, who is a Bharatiya Janata Party lawmaker. At its last hearing two weeks ago, the court has said Thakur seemed to have "committed perjury" after it was informed that he had made a false statement on asking the International Cricket Council or ICC to clarify whether a recommendation made by the Lodha committee amounted to interference in the board's running.

The Supreme Court's decisions mean the BCCI will have to enforce age and tenure caps and implement the one-state-one-vote formula. Mumbai Cricket Association's Sharad Pawar has already resigned as Mumbai president. N Srinivasan of Tamil Nadu and Niranjan Shah of Saurashtra, both above 70 years, will now have to relinquish their positions. Justice Lodha said this decision by the Supreme Court will act like a template for all sports federations in India.

The Supreme Court has asked former Solicitor General of India and senior lawyer Fali Nariman and Gopal Subramanium to assist in selecting an observer for BCCI.

The court once again iterated that all reforms suggested by Lodha panel have to implemented in full. The reforms were made binding on the BCCI in July 2016, but the BCCI kept avoiding their implementation.

The Supreme Court further said that committee of administrators will look after the BCCI's affairs. The seniormost BCCI vice-president will act as president while the joint secretary will act as secretary. All the BCCI office-bearers and state associations will have to give an undertaking to abide by the Lodha Committee recommendations, it further ruled.

The court said it will pass a separate order on 19 January for appointing the administrator.

The Lodha Committee, headed by former Chief Justice of India RM Lodha, was set up in January 2015 by the Supreme Court to suggest changes in the way the BCCI, the world's richest cricket board, is run.

The committee had made recommendations in early 2016 and these were approved in July by the Supreme Court, which asked the BCCI to implement them. In earlier hearings the court has rapped the board for not obeying that order, asking whether it believes "it is a law unto itself".

At the last hearing on 16 December, the BCCI rejected the Lodha Committee's recommendation that former union home secretary G K Pillai be appointed as an independent auditor to scrutinise the grant of contracts by the board as ordered by the court. It has also suggested that one person hold only one post and that each state have only one vote on the board. Currently states like Maharashtra have more influence than the others.

Earlier, when N Srinivasan was asked to step aside as BCCI president during the Indian Premier League spot-fixing and betting hearing in 2015, the Supreme Court had appointed senior vice president Shivlal Yadav to run the Board's affairs. Sunil Gavaskar was asked to oversee the IP affairs that year.