In a glaring example of the abysmal state of public healthcare in India, a patient at the Ranchi Institute of Medical Sciences (RIMS) in Jharkhand was served food on the floor of the hospital ward on Wednesday as the kitchen staff said they ''had no plates''. 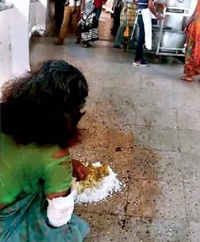 Palmati Devi, her right arm wrapped in bandage, ate her meal of rice, dal and vegetables from the floor after ward boys allegedly first made her clean the floor, despite the fractured arm.

A patient at the orthopaedic ward, Palmati Devi didn't have her own plate and had asked for one, but was rudely told off by kitchen staff who said there were none at the large hospital that has an annual budget of Rs300 crore.

The man who served her food on the floor has been sacked and the purchase of disposable plates have been commissioned.

"It's not a common practice but we have started an inquiry and will take action those who served the food on the floor and then forced her to eat from there," B L Sherwal, the hospital's director, told NDTV.

The state of public hospitals and how patients are treated came under the media glare recently after a poor tribal in Odisha, Dana Majhi, walked 10 km carrying his dead wife's body on his shoulder after being denied hearse facilities.

According to an eyewitness, when Palmati Devi asked for food, she was initially rudely turned away.