A report in the medical journal Lancet, titled, Assuring Health Coverage for all in India, points to the disturbing state of public healthcare in India. 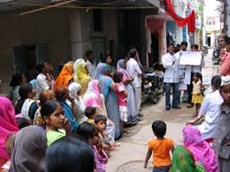 The report collated and published by leading health researchers points out  that India was one of the worst performing countries among BRICS nations (Brazil, Russia, India, China and South Africa) and lagged behind its more impoverished neighbours such as Nepal and Bangladesh.

However, Indian had achieved much progress in the past to help fight prevalence of several infectious and preventable diseases.

"We're doing poorly across the board according to aggregate indicators," the report quoted Reddy, though, results differed states from state, along caste and class lines. "We have to push to do better not only on aggregate indicators but also address these inequities and provide universal health access."

Preventable infections such as diarrhoea remained a leading cause of death among children under 5, which meant not much success has been achieved in awareness on the ground.

Equity in healthcare had also fractured along the rural-urban and ethnic group lines - with infant mortality in rural areas 17 points higher than in urban areas.

The under-5 mortality rate among tribal children stood at 15 per cent higher than the national average.

The report pointed out that treating India's ailing healthcare system needed to begin with better primary care, and which could come from better public funding of the sector with private healthcare stepping in to fill any gaps remaining.

Crucially, better stewardship of public healthcare was the need of the hour with better coordination between the states and the centre, the report prescribes.