A proposal by the Planning Commission seeking major changes in the government's public health policy from the 12th Plan, by assigning increased role for the private sector and greatly reducing the government's role, has drawn flak from the health ministry as well as experts and non-government organisations working in the health sector. 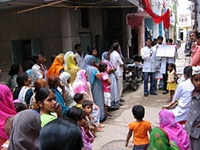 According to a Times of India report, the health ministry has taken a strong stance against what is being referred to as "corporatisation of health care" and will send a strong reply to Planning Commission deputy chairman Montek Singh Ahluwalia, arguing that "the first priority should be to strengthen the public health system and involve the private sector only for critical gap-filling".

The letter from health minister Ghulam Nabi Azad says that "the private sector should not substitute but actually supplement the public sector".

The plan panel's proposal sketches the dramatic policy reversal that would bring in universal health insurance coverage by allowing a selected 'network' of private and other operators to sell their services on competitive basis to the government, for which they would be paid on what the health industry calls 'capitation' basis or simply on fixed rates for different treatments for every person handled.

The commission's proposal runs contrary to what even its High Level Expert Group (HLEG) on health reforms had said as recently as November 2011.