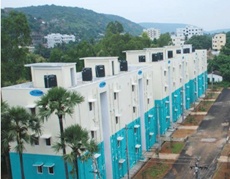 The union cabinet chaired by the Prime Minister Narendra Modi today gave its approval for amending the existing Foreign Direct Investment (FDI) policy on the `Construction Development Sector` in line with the government's budget announcement.

Investment will be subject to the condition that a minimum area to be developed under each project would be of a minimum floor area of 20,000 sq metres in case of construction-development projects while there is no condition of minimum land in case of development of serviced plots.

In case of a combination project, any one of the aforestated two conditions will need to be complied with.

A cabinet release said 100 per cent FDI under the automatic route is permitted in completed projects for operation and management of townships, malls/shopping complexes and business centres.

The release also clarified that FDI will not be permitted in an entity which is engaged or proposes to engage in real estate business, construction of farm houses and trading in transferable development rights (TDRs).

The minimum area and minimum capital requirements will not, however, apply to hotels and tourist resorts, hospitals, special economic zones (SEZs), educational institutions, old age homes and investment by NRIs.

The conditions will also not apply to the investee/joint venture companies which commit at least 30 per cent of the total project cost for low-cost affordable housing.

The investor will be permitted to exit on completion of the project or after three years from the date of final investment, subject to development of trunk infrastructure.

The government may, in view of facts and circumstances of a case, permit repatriation of FDI or transfer of stake by one non-resident investor to another non-­resident investor, before the completion of the project. These proposals will be considered by FIPB on case to case basis.

The project should conform to the norms and standards, including land use requirements and provision of community amenities and common facilities, as laid down in the applicable building control regulations, bye-laws, rules and other regulations of the state government/municipal/local body concerned.

The Indian investee company will be permitted to sell only developed plots. The policy defines "developed plots" as those where trunk infrastructure, including roads, water supply, street lighting, drainage and sewerage, have been made available.

The Indian investee company will be responsible for obtaining all necessary approvals, including those of the building/layout plans, developing internal and peripheral areas and other infrastructure facilities, payment of development, external development and other charges and complying with all other requirements as prescribed under applicable rules/bye-laws/regulations of the state government/ municipal/local body concerned.

The state government/ municipal/ local body concerned, which approve the building / development plans, will monitor compliance of the above conditions by the developer.

These measures are expected to result in enhanced inflows into the construction development sector consequent to easing of sectoral conditions and clarification of terms used in the policy. It is likely to attract investments in new areas and encourage development of plots for serviced housing given the shortage of land in and around urban agglomerations as well as the high cost of land. The measure is also expected to result in creation of much needed low cost affordable housing in the country and development of smart cities, a cabinet release said.

The move will facilitate overseas capital to invest in building homes, offices and shopping centres in Asia's third-largest economy, helping Prime Minister Narendra Modi deliver on his promise of creating 100 smart cities in India by 2020.

In its maiden budget in July, Modi's administration had proposed easing built up area and minimum capital requirement for foreign investments.