India ushers in GST at historic midnight session of Parliament

The Goods and Services Tax (GST) finally came into force on the midnight last night after a historic midnight session at the Central Hall of Parliament addressed by President Pranab Mukherjee, Prime Minister Narendra Modi and finance minister Arun Jaitley. 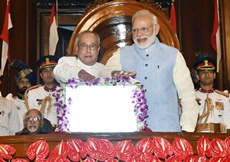 President Pranab Mukherjee and Prime Minister Narendra Modi pressed a button to usher in the GST, which works as a tax on consumption, subsumes central levies, including excise duty and service tax, as well as state value-added tax and levies such as octroi and converts the country into a single market.

However, Jammu & Kashmir, which supports the levy, is yet to implement it.

It's historic in the sense that both the centre and the states have yielded ground on their taxation rights, after 17 arduous years of negotiations by successive governments at the centre and in the states.

Many opposition parties, including the Congress, the Left and the Trinamool Congress, however, stayed away from the historic function.

Speaking on the occasion, the prime minister said that the day marks a decisive turning point, in determining the future course of the country.

He recalled that the Central Hall had been witness to several historic occasions in the past as well, including the first session of the Constituent Assembly, India's independence, and the adoption of the Constitution. He described GST as the finest example of cooperative federalism.

He described GST as a `Good and Simple Tax', which would ultimately benefit the people would ensure one nation, one tax, adding that GST would lead to immense savings of time and cost. Savings of fuel due to elimination of delays at state border crossings will help the environment as well, he added. The prime minister said GST would lead to a modern tax administration which is simpler, more transparent, and helps curb corruption.

The prime minister also quoted a shloka from the Rig Veda to describe the spirit of common goal, common determination, leading to mutual and shared benefit for the society.

The new tax system, which will dramatically ease inter-state movement of goods, helping to lower prices and boost revenue, while providing a fillip to the economy and improving compliance, comes after 17 arduous years of negotiations by successive governments at the centre and the states.

However, the implementation of GST is likely to face some hurdles as many businesses, especially in the small and medium sector, have complained of inadequacy of time for preparations.

While large companies have put GST systems in place, medium and small businesses seem to be grappling with it. ''The medium-term impact of GST on macroeconomic indicators is expected to be extremely positive,'' said the CII, adding that businesses are fully prepared for the rollout.

Meanwhile, sections of trade and industry in various states, including Rajasthan and Uttar Pradesh, went on strike against the new levy, saying it could increase taxes.

The finance ministry maintained that all systems are in place and the Central Board of Excise and Customs has got most businesses to migrate to the GST network.

Businesses, however, are not yet ready with their pricing policies post GST implementation and there could be lapses on the profiteering issue.

The finance minister had on Thursday asked trade and industry not to raise prices. An anti-profiteering agency is on the anvil to monitor unjust price rises.

The railway ministry has granted exemption from GST in respect of passengers travelling in second class, metro and sleeper class. GST levy is restricted to 5 per cent for those travelling in first class and air-conditioned coaches.

Transport of goods by rail will be taxed at 5 per cent, but essential goods like milk and agriculture produce will be exempt.

The GST Council had fitted nearly 2,500 goods and services in the five-tier tax structure of 0, 5, 12, 18 and 28 per cent. With higher input tax credit, prices of most goods may reduce, but services, most of them taxed at 18 per cent, could become more expensive.

While the overall impact of the tax is certain to be positive, the government is cautious about the GST's impact in the medium term. It may need at least six to nine months to better assess the benefits to the economy.