Prime Minister Narendra Modi today launched the BHIM app which, according to him, will make it easier for the common man to carry out digital banking transactions across the country. 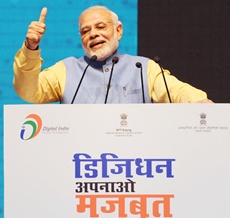 Announcing the launch of the new app at the second Digi Dhan Mela at Talkatora Stadium in the national capital, the prime minister said that with BHIM app illiterate people can use a thumb to access their bank accounts.

With the Aadhar-based BHIM mobile app, the government plans to enable citizens and merchants to undertake realtime digital transactions through the Digi-Dhan Bazaar. The official website for it is: https://digidhan.mygov.in/

The prime minister also announced that prizes will be given to those who make transactions of more than Rs50 and less than Rs3,000 using digital payment methods. ''Over the 100 day period, several families will be given the prizes. These schemes were launched to benefit poor.''

He also also announced that mega draw will take place on 14 April, the birth anniversary of Babasaheb Ambedkar. Talking about the two initiatives, the Lucky Grahak Yojana and DigiDhan Vyapar Yojana, PM Modi said the schemes are a Christmas gift to the nation, while announcing biometric payment methods from 1 January 2017.

''In two weeks we will make one more accomplishment, it's security is being worked on. It will empower BHIM, for which you'll only require your thumb to pay,'' Modi said, adding, ''You can use BHIM app on smartphones and other phones, even without internet.''

On the BHIM name, he said, ''Ambedkar's contribution led to the formation of the Reserve Bank of India. He was a great economist. The mobile app has been named BHIM after Bhim Rao Ambedkar.''

Thanking the nation for going through hardships after demonetisation move was announced on 8 November, Modi said their efforts will make the country corruption-free. He further added that 1.25 billion people came together to fight against their own evils.

Modi also expressed his gratitude towards the media, saying that their criticism has helped the government formulate schemes and take up initiatives to empower the poor.

''In the last 50 days media while covering me, also questioned the government on how will the country become digital when poor don't have mobile. Media will now question everyone if they have a mobile and BHIM app so why are they carrying cash,'' PM Modi said.

''All our efforts are for the poor. I urge Indians to conduct at least five transactions with BHIM app till January 1,'' said Modi.

Modi said India has always united to fight problems facing the nation. ''People gave up subsidy on gas cylinders and we have given it to 1.5 crore poor mothers so that they can live a healthier life.

And now, ''India has united to fight problems within. Corruption has spread like termites and after November 8 we know people want an honest life. Indians have shown strength by dealing with withdrawal of 86 per cent of currency,'' he added.