With more money flowing back into the banking system and the amount of bank notes stashed away by black money holders coming down substantially in the wake of the government's demonetisation move, and future transactions increasingly becoming digital, money flowing into the tax net will also increase substantially, finance minister Arun Jaitley has said. 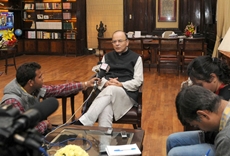 He said as more hoarded money comes into the open, future tax revenues would also be much higher than what is currently being collected. This would also enable the government at some stage to make taxes more reasonable, which will apply to both direct and indirect taxes, Jaitley said.

The central government, he said, is embarked on an overhaul of the financial system and the demonetisation move is part of a strategy of moving the country away from high cash dominated economy to a less cash economy where the amount of paper currency comes down, Jaitly said.

India, he said has developed into a society which only deals in cash or predominantly in cash and it should be remembered that from 2004-2014, high denomination currencies increased from a mere 36 per cent to over 80 per cent. There are economic costs of dealing in cash, there are social costs of dealing in cash. These are the costs which system has to bear.

While cash will still exist, he said, there would be a greater digitisation. In fact, we see with a sense of satisfaction, a huge movement in favour of digitisation which is taking place. There are obvious advantages of this.

However, the finance minister said the transient problem which people have to face, we are now being solved through a rapid remonetisation exercise. ''Everyday RBI is injecting a large amount of currency into the banking system as part of its remonetisation exercise. Significant amounts are going to be injected in next three weeks which are gradually bringing the pressure down,' He said.

''The advantages are so much money which was operating as loose cash in the system, has today come into the banking system. It has to be accounted for where taxes have not been paid, which will now be recovered.

''Future transaction would be substantially digital and once they are substantially digital, they would come in the tax net. Therefore, the future taxation level would be much higher than what is currently being collected. This would also enable the Government at some stage to make taxes more reasonable which will apply to both direct and indirect taxes.

''The banking system will have lot more cash in it and therefore, it's ability to support economy with low-cost cash, that is cash whose capital is much lesser, would be much higher. Obviously with all these advantages, the social cost also on the system will go down. Therefore, the cash used for bribery, for counterfeit currency, for terrorism, for evading taxes itself will go down,'' Jaitley said.

He said the government is well aware of the subversive activities of some unscrupulous people, including some in the banking system and others trying to foil the government's move and trying again to accumulate large amounts of cash unlawfully.

Obviously, there is a breach of law in this and this is a step which hurts the economy. And therefore, all agencies are keeping an eye on this. They will investigate this matter and all those who are found indulging in these malpractices will have to pay a very heavy price for what they are doing, he said.