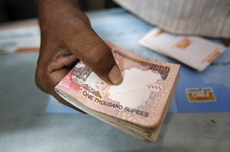 The decision comes in the wake of massive protests by garment workers that rocked Bengaluru's Electronic City, as factory workers sought withdrawal of the changes in pension fund withdrawal norms.

Violent protestors disrupted traffic on the arterial Hosur Road for the second consecutive day on Tuesday, with thousands of agitators assembling at the Bommanahalli Junction, The Hindu reported.

Protesters also pelted stones at the Hebbagodi police station and set seized vehicles parked there on fire according to a DNA report.

Bengaluru city has a large number of garment units, which employ about 5 lakh workers, according to NDTV.

Television channels showed policemen in riot gear beating up protesters and firefighters trying to douse vehicles which were set on flames.

Reports said 62 people, including 24 policemen, were injured in the violence while the police arrested 20 people as tension escalated in Karnataka's capital.

On Monday, around 15,000 women garment workers staged a massive demonstration on the outskirts of Bengaluru, protesting change in the Provident Fund Act, which denies the right to withdraw employer's contribution till the subscriber reaches 58 years.

With the rescinding of the order, curbs to accessing the ?entire provident fund corpus, which were to come into effect from 1 May, now stand withdrawn, ??subject to certain conditions.

Trade unions are firm on their demand for removal of all curbs on withdrawal ?of ''money that belongs to workers''.

Announcing the government's decision today, minister of state for labour and employment (independent charge) Bandaru Dattatreya, said the decision was taken after ''detailed deliberations and on receiving various representations from trade unions''.

Dattatreya said a new notification would be issued soon, after which the decision would come into force with immediate effect. Till then, the notification issued on 10 February 2016, imposing curbs on PF withdrawal, which was to take effect from 1 May, ''has been kept in abeyance till August 1,'' he added.