India's crippling cash shortage could be mostly resolved by mid-January and completely disappear by the end of February as the demand-supply gap narrows with greater currency printing. reports 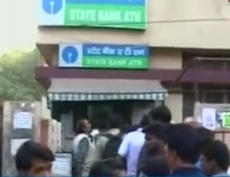 Cash disbursement to the public could touch Rs9 lakh crore by the second week of January if the government's printing presses work at the current pace, senior bankers told The Economic Times. This would be more than 50 per cent of the amount withdrawn from the system, assuming that almost all of the Rs15 lakh crore in old Rs500 and Rs1,000 notes is deposited with banks by the end of December.

Calculations by ET, cross-checked with bankers, show that money with the public could rise to over Rs13 lakh crore by the second week of February based on the printing presses' current capacity. This would be very close to the amount withdrawn from the system and the cash shortage could effectively be over by the end of February, bankers said.

The Reserve Bank of India did not reply to an email on the issue, but data on the regulator's website shows it had disbursed notes worth Rs4.6 lakh crore in the one month ended 10 December. If one assumes that presses will work at the same speed in the coming weeks, the amount disbursed to the public should cross Rs9 lakh crore by 10 January.

A month later, by 10 February, the presses would have churned out close to Rs14 lakh crore of currency notes, or over 90 per cent of the amount withdrawn from the system.

Prime Minister Narendra Modi's decision to withdraw legal tender status for Rs500 and Rs1,000 notes caused a serious shortage of cash in the system, with the Reserve Bank of India unable to satisfy the demand for currency, resulting in long queues outside bank branches and automated teller machines (ATMs) and increasing public ire.

Several experts and political leaders have slammed the government's demonetisation move as arbitrary and ill-advised. Economic growth is likely to be hit in the next two quarters and former finance minister P Chidambaram has estimated that it would take seven months for RBI to replace the notes withdrawn from the system.

The ET's calculations and conversations with bankers show the replacement could happen much more quickly. But the replacement rate could slow down if RBI prints more Rs500 notes and fewer Rs2,000 notes.