In a major step towards bringing transparency in international financial transactions and fighting the menace of money being stashed overseas, India and Switzerland today agreed on automatic sharing of information on banking transactions. 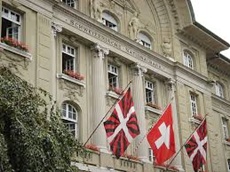 As per the 'Joint Declaration' for the implementation of Automatic Exchange of Information (AEOI) between the two countries, the government of Switzerland will give information on Swiss bank accounts of Indians as of September 2018 and onwards, but not before.

They will not share details about accounts held prior to that period, while the first such exchange will happen only in September 2019.

Fighting the menace of black money stashed in offshore accounts has been a key priority area for the Narendra Modi government. ''The signing of the agreement will now make it possible for India to receive from September 2019 onwards, the financial information of accounts held by Indian residents in Switzerland for 2018 and subsequent years, on an automatic basis,'' an official release stated.

While Switzerland has conformed to the global standards on automatic exchange of information with the signing of the declaration, India, on its part, has promised to safeguard the confidentiality of the data.

Describing the signing of declaration as a "big step", revenue secretary Hasmukh Adhia tweeted: "The income tax department will be able to obtain information from accounts of all Indians stashed in Switzerland from 2018 onwards."

The Swiss Federal Department of Finance said in a statement that the signing of the joint declaration with India confirms Switzerland's international commitment to implementing the automatic exchange of Information (AEOI) standard.

"Switzerland is thus strengthening its network of AEOI partner states. India meets in particular the high demands in terms of adherence to the principle of speciality and the safeguarding of confidentiality for the data delivered, which are prerequisites for the introduction of the AEOI," it said.

Switzerland, which has been the centre for stashing away unaccounted wealth for the world's rich and the Indians' black money, used to be known for very strong secrecy walls till a few years ago around its banking practices. This has now crumbled due to global pressure

However, several information requests on details about Indians who have accounts in Swiss banks are still pending and these are unlikely to be revealed.

Today's declaration also does not talk about exchange of information based on stolen data or pending requests from India.

Following the government's demonetisation of high value currency notes that made it difficult for holders of fake currency to do business, holders of such cash have been demanding that the government also take action to bring back the unaccounted money stashed abroad, particularly in Swiss banks.