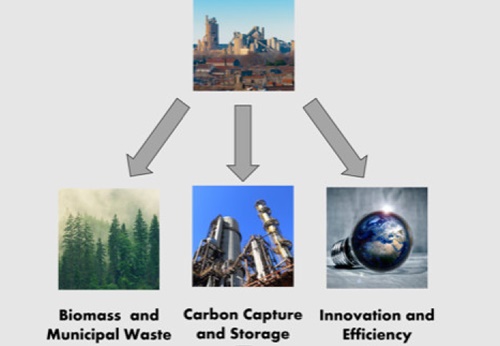 Around 3.5 billion tonnes of Ordinary Portland Cement, a critical building material worldwide, are produced annually – but every tonne emits up to 622 kg of carbon dioxide (CO2) The cement industry contributes seven per cent of global anthropogenic CO2 emissions, with the amount of CO2 released depending on differences in the materials used in production, the types of cement kiln used, and the fuels being burned.
This could be done using a combination of carbon capture and storage (CCS) and fuel and intermediate product substitutes. However, they say the most sensible solution might be to combine burning municipal solid waste with CCS, which could slash emissions to minus 20 per cent of their current level.In a new paper, researchers at Imperial College London have considered the potentially most effective ways to decarbonise the industry. They say that, with interventions, emissions could range from 80 per cent to minus 50 per cent of current emissions where CO2 is actively removed from the atmosphere.
Lead author Professor Paul Fennell, of Imperial’s Department of Chemical Engineering, said: “CO2 is a key greenhouse gas driving climate change, and it’s released by several aspects of cement production. Process- and fuel-related emissions both account for a significant proportion of cement’s total emissions - so both process modification and energy efficiency are important for carbon reduction. By identifying these sources and suggesting workable interventions, we hope to help decarbonise the cement industry."
The report, published in Joule, gives an overview of the main decarbonisation options and their interplay in terms of direct emissions from the cement production process. Identified are three key interventions with the most potential impact.
CCS 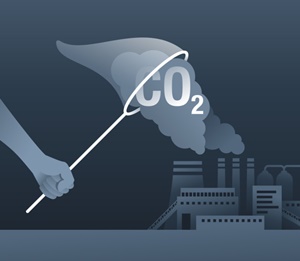 The inherent chemistry behind cement production is responsible for up to 60 Illustration showing a net capturing carbon from a power plantper cent of cement’s carbon emissions, so the release of carbon is difficult to prevent. To make cement, powdered limestone is heated and combined with a variety of components, to produce an intermediary product called clinker. Forty per cent of the weight of limestone is CO2, which is released during this process.
CCS plants attached to cement kilns could capture the carbon that’s released and store it where it will not enter the atmosphere. The researchers say that CCS has significant potential, with numerous pilot and larger-scale demonstrations planned.
Biomass and municipal waste 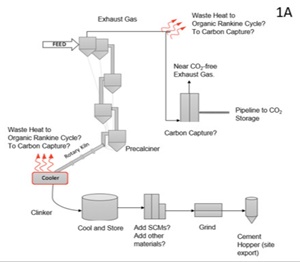 Diagram depicting the cement production processThe cement production process
Cement production is energy intensive, requiring 3.3 Gigajoules of thermal energy per ton of clinker - so another source of carbon in the industry is the way plants are powered. Instead of using carbon-intensive fossil fuels, manufacturers could use carbon-neutral biomasses.
However, biomass is a limited resource, and the costs of using it at such a scale could be prohibitive, so it would need to be combined with municipal waste. This could be a cost saving way to reduce fossil fuel use, in addition to being a relatively environmentally friendly method of waste management, particularly if care is taken to divert all recyclable material prior to use in the kiln.
Clinker alternatives 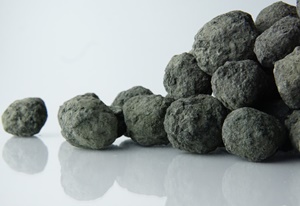 Balls of grey cement clinker on white backgroundProducing clinker is carbon intensive
Producing clinker is carbon intensive because of the carbon released by limestone, and because of the energy required in the process. Therefore, emissions may be cut by reducing demand for clinker, such as by substituting it with waste materials like blast furnace slag and coal ash. The researchers argue that  30 to 40 per cent of clinker can be substituted in this way without compromising cement strength.
Professor Fennell added: “Although this analysis can give insights into what is and is not critical for net zero or negative emissions, a full and comprehensive lifecycle analysis is needed to fully quantify emissions.
"Very deep decarbonisation will require going further" - Professor Fennell
“The most striking feature of this simple analysis is that it is the underlying biologically derived component of the fuel, together with the addition of CCS that makes the biggest reductions in CO2 emissions possible. Clinker substitution is valuable, particularly when CCS is not deployed, but very deep decarbonisation will require going further.”
“Decarbonising cement production” by Paul S. Fennell, Steven J. Davis, and Aseel Mohammed, published 20 May 2021 in Joule.
MORE REPORTS