Climate change near `point of no return', warns UN chief

Global climate change has reached a "point-of-no-return" and the climate crisis is "in sight and hurtling towards us," United Nations Secretary-General Antonio Guterres warned on Sunday ahead of the meeting of the Conference of the Parties (COP-25) that got underway in Madrid, Spain today. 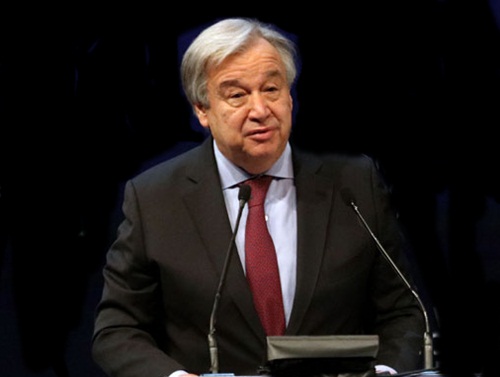 The UN Secretary-General has outlined that the world needs “increased ambition and commitment” from governments during the coming days of the COP25, and called for “accountability, responsibility and leadership” to end the global climate crisis.
“My message here today is one of hope not of despair” said the UN chief, addressing journalists at a press conference in the Spanish capital on Sunday, after revealing the key takeaways from the World Meteorological Organisation’s State of the Climate report, due to be published during COP25.
Indeed, three decades after NASA scientist James Hansen made headlines by telling the US Congress global warming had begun, evidence of its dire impacts is so overwhelming that "climate denier" is synonymous with insisting the Earth is flat.
Guterres lambasted the world's major economies, describing their efforts to reduce greenhouse gas emissions overheating the planet as "utterly inadequate". He didn't specifically name the countries.
"Some countries like China and Japan are signalling their unwillingness to increase ambition," said Laurence Tubiana, CEO of the European Climate Foundation and, as a former negotiator for France, a main architect of the Paris Agreement.
Nor have India, Russia or Brazil expressed any enthusiasm for ratcheting up carbon-cutting pledges submitted under the 2015 treaty.
Donald Trump has taken things a step further by yanking the US out of the Paris deal entirely.
But even if all the world's nations honoured their pledges, the planet would still heat up at least three degrees Celsius above preindustrial levels, a sure-fire recipe for calamity, scientists say.
Nations have agreed to cap warming -- already up by one degree Celsius - at "well below" 2C.
The talks in Madrid - the 25th "COP", or conference of the parties, in as many years - will focus on finalising rules for global carbon markets, and setting up a fund to help countries already reeling from climate-enhanced heatwaves, droughts, floods and storms made worse by rising seas.
“I expect a clear demonstration of increased #ClimateAction ambition & commitment out of #COP25. Leaders of all countries need to show accountability & responsibility. Anything less would be a betrayal of our entire human family and all generations to come,” he said in a Twitter remark.
“The last five years have been the hottest ever recorded. Sea levels are at the highest in human history”, he said, listing the benchmarks which indicate that “the point of no return is no longer over the horizon. It is in sight and is hurtling towards us”.
But scientists have provided a roadmap away from that point, which will allow us to limit global temperature rise to just 1.5 degrees Celsius above pre-industrial levels, reach carbon neutrality by 2050 and cut greenhouse gas emissions by 45 per cent from 2010 levels, by 2030.
Efforts so far have been “utterly inadequate” and the Paris Agreement commitments still mean a rise of 3.2 degrees unless more drastic action is taken, said the UN chief, but 1.5 degrees “is still within reach.”
“The technologies that are necessary to make this possible are already available”, he added, “the signals of hope are multiplying. Public opinion is waking up everywhere. Young people are showing remarkable leadership and mobilization.”
The key missing ingredient is a lack of political will he said: “Political will to put a price on carbon. Political will to stop subsidies on fossil fuels”, or to shift taxation from income to carbon, “taxing pollution instead of people.”
He said digging and drilling had to stop, replaced by renewable energy and nature-based solutions to drastically slow climate change.
“In the crucial 12 months ahead, it is essential that we secure more ambitious national commitments – particularly from the main emitters – to immediately start reducing greenhouse gas emissions at a pace consistent to reaching carbon neutrality by 2050.”
Guterres said at least $100 billion dollars must be made available to developing countries for mitigation and adaptation and to take into account their “legitimate expectations to have the resources necessary to build resilience and for disaster response and recovery.”
The “social dimension” of climate change must also be paramount, so that national commitments include “a just transition for people whose jobs and livelihoods are affected as we move from the grey to the green economy.”
In conclusion he noted: “We are in a deep hole and we are still digging. Soon it will be too deep to escape.”
The Secretary-General announced on Sunday that the current head of the Bank of England, Mark Carney, is to become the UN’s new Special Envoy for Climate Action.
MORE REPORTS