As Gujarat braced for very severe cyclonic storm ‘Vayu’, which is expected to make landfall on Thursday, Gujarat chief minister ordered compulsory evacuation of people in semi-concrete residences within 10 km of the coastline. He also ordered overnight vigil by authorities of the coast. 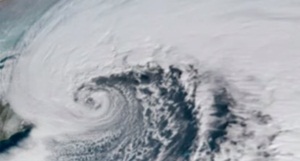 The Western Railway has short-terminated or cancelled several trains in view of Cyclone Vayu that it likely to make landfall on Gujarat's coast tomorrow morning. Cyclone Vayu is expected to touch Gujarat coast on 13 June.
Western Railway has cancelled all trains from 6 pm today till the morning of Friday (14 June) due to Cyclone Vayu. Emergency trains are being readied to deal with the crisis situation. Western Railway said in a release that all passenger and Mail/Express trains to Veraval, Okha, Porbandar, Bhavnagar, Bhuj and Gandhidham stations are being short terminated/cancelled. One special train from each station will be deployed to evacuate all persons from respective areas.
Mumbai and some neighbouring coastal areas of Maharashtra witnessed a windy Wednesday morning.
The National Disaster Relief Force (NDRF) said the evacuation process is going on. “We have deployed 52 teams in the areas which are likely to be affected. We request the citizens in those areas to listen to the authorities. Evacuation process will be completed by midnight. We expect minimal damage to property and life. Teams are on high alert," Times Now quoted DG of NDRF SN Pradhan as saying.
Twenty villages in Gujarat's Valsad district have been put on alert. Thirty-nine schools in villages near the coasts in Valsad will stay shut. Rescue teams are on alert.
According to the India Meteorological Department (IMD), the cyclone is very likely to move nearly northwards and cross Gujarat coast between Porbandar and Mahuva around Veraval and Diu region as a Very Severe Cyclonic Storm with wind speed 145-155 kmph gusting to 170 kmph around Thursday morning.
In the wake of the cyclonic storm, the Arabian Sea has turned turbulent, said the IMD, adding that bigger waves are now advancing towards coastal areas. Meanwhile, huge sea waves lashed Devbaug village in Malvan tehsil of Sindhudurg district in Maharashtra today.
“The sea condition is very likely to become very high to phenomenal over eastcentral and adjoining northeast Arabian Sea & Gujarat coast from 12th June and over north Arabian Sea on 13th June 2019,” said the IMD.
As per the IMD press release, “Light to moderate rain/thundershowers very likely at most places in all the districts of Saurashtra and Diu; at many places in the districts of Gujarat region namely Ahmedabad, Gandhinagar, Mehsana, Aravali, Anand, Mahisagar, Baroda, Narmada, Bharuch, Surat, Tapi, Dangs, Navsari, Valsad, and Daman, Dadra Nagar Haveli; at a few places in the districts of Kutch. Dry weather very likely in remaining districts of Gujarat region.”
Fishermen have been advised not to venture into the sea along and off Gujarat coast from Wednesday to Saturday.
The Indian Coast Guard, the Air Force, Navy, and Army units are on standby. Also, surveillance aircraft and helicopters are conducting aerial surveillance of the areas. "Mobile communication vehicles have been positioned at nodal points along with communication support groups who have been formulated at air bases in Gujarat to handle potential contingencies," a defence PRO said.
MORE REPORTS