Tropical cyclone Fani, which made a landfall in the Odisha coast with wind speeds of up to 185 kmph in the morning today, wrought destruction everywhere, bringing down trees and power lines and “extensively” damaging the tourist town of Puri. 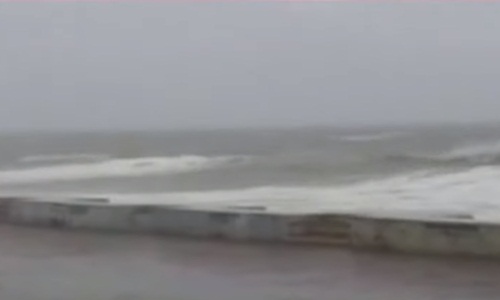 Three people have been killed as cyclone Fani made a landfall in Puri on Odisha coast around 8 am, triggering heavy rainfall coupled with high velocity winds with speed of 175 kmph in vast areas. But, with nearly a million people evacuated before the cyclone making a landfall, casualties seemed restricted.
Large areas in Puri and adjoining places were submerged with water as heavy rains battered the entire coastal belt of the state. Several trees were uprooted and thatched structures destroyed at some places, including Bhubaneswar.
All flights from Bhubaneswar have been cancelled from midnight, Kolkata airport will be shut between 3 pm today and till 8 am on Saturday.
A total of 140 trains, including 83 passenger trains, have been cancelled so far.
At least 14 districts in Odisha are in the path of the Cyclone Fani. People have been evacuated from Gajapati, Ganjam, Khurda, Puri, Naygarh, Cuttack, Jagatsinghpur, Kendrapara, Jajpur, Bhadrak and Balasore Mayurbhanj, Dhenkanal and Keonjhar which are expected to be badly impacted by the storm. Nearly 11 lakh people have been evacuated in last 24 hrs. Ganjam and Puri evacuated more than 3 lakh and 1.3 lakh people respectively to safe shelters. About 5,000 kitchens started operating to serve people in the shelters.
The Army, Navy, Air Force, Coast Guard and disaster management agencies are on stand-by. Prime Minister Narendra Modi on Thursday reviewed preparedness for Cyclone Fani with senior officials.
Indian Naval Ships Sahyadri, Ranvir and Kadmatt with relief material and medical teams have been deployed on the evening of 1 May and are on stand-by south of the cyclonic storm to be the first responder and commence rescue operation as soon as the cyclone crosses coast. Additional relief material, medical and diving teams have been shifted from Visakhapatnam to Odisha by road to augment the rescue and relief efforts. Aircraft have been kept standby for immediate deployment to carry out aerial survey as soon as the cyclone crosses coast to assess the impact of the cyclone and aid in rescue operation. Helicopters are also kept standby for joining in rescue operation and for air dropping of relief material when required.
Cyclone Fani, which has been building up over the east coast of Sri Lanka before reaching the northern reaches of the Bay of Bengal, struck the Odisha coast at around 8 am, the state-run India Meteorological Department (IMD) said.
Howling winds gusting up to 200 kmph whistled past trees, uprooting scores, and pouring rain. But the streets were deserted in the state capital Bhubaneswar and Puri.
The IMD says the strongest storm to hit India since 2014, however, is now weakening with wind speeds falling to 155 kmph.
In Puri, the damage to the infrastructure and the environment has been extensive with power supply, telephone lines disrupted.
Cyclone tracker Tropical Storm Risk put Fani as a powerful category four storm on a scale of one to five. The IMD said the storm was now weakening.
The extremely severe cyclonic storm `Fani’ weakened into a very severe cyclonic storm with wind speeds of 155-165 kmph, gusting to 180 kmph and lay centered over coastal Odisha about 18 km to the east, north-east of Bhubaneshwar and 20 km to the southeast of Cuttack, at 1230 hours today.
Bhubaneshwar Airport reported maximum sustained wind speeds of 92 kmph, gusting to 130 kmph at 1130 hours today.
The IMD said `Fani’ is very likely weaken further over the next nine hours as it continues to move north-northeastward and weaken further as it reaches Gangetic West Bengal and further to Bangladesh by tomorrow morning.
The heavy winds affected an area close to 60 km inland, with electricity poles down in Bhubaneswar, where authorities had ordered the airport to stay closed. Schools and colleges in Odisha were also shut. A major hospital in the city suffered extensive structural damage but all patients and staff were safe, authorities said.
More than 600 pregnant women were shifted into safe locations, with nearly 500 ambulances on standby. Some 242 medical institutions had been provided with power back-up, government authorities said.
In neighboring Bangladesh to the north, authorities have begun moving 500,000 people from seven coastal districts, a government minister said.
The storm is due to hit Bangladesh late on Saturday and ahead of that, ports have been ordered shut, a government official said.
Odisha had evacuated more than a million people from the most vulnerable communities along the low-lying coast, Chief Minister Naveen Patnaik said on Twitter.
Hundreds of disaster management personnel were deployed in the state, and doctors and other medical staff were told to defer any leave until May 15.
Neighboring West Bengal also planned to shut down the airport at Kolkata, its state capital.
Meanwhile, Indian Oil Corporation Ltd, the country’s top refiner, said its 300,000 barrels per day (bpd) refinery, on the coast of Odisha, had been built to withstand windspeeds of 250 kph and would not halt operations.
However, its 1,500 staff were told to stay indoors, a company spokeswoman said.
Oil and Natural Gas Corp Ltd (ONGC) and reliance Industries Ltd have shifted people from their rigs off the coast of Andhra Pradesh as a precaution.
State-run power company NTPC Ltd also kept its 3000-megawatt Talcher power plant in Odisha running.
MORE REPORTS