Cyclone ‘Fani’ has intensified into a ‘severe storm’ on Monday evening and is headed towards the Odisha coast scraping through Tamilnadu and Andhra coasts, the India Meteorological Department (IMD) has said. 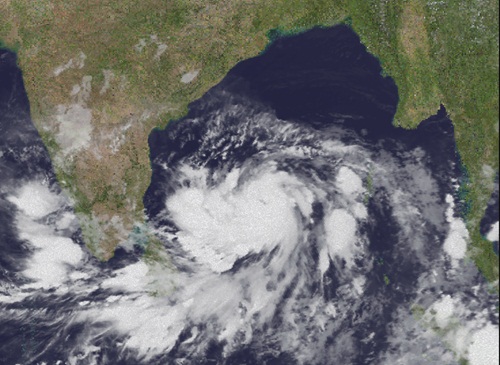 IMD said `Fani’ could develop into an ‘extremely severe cyclone’ by Wednesday, when it crosses the Odisha coast.
Fishermen who were at sea have returned to shore in Kothapatnam in Prakasam district of Andhra Pradesh as Fani intensified into severe cyclonic storm on Monday evening. The government also put the National Disaster Response Force and the Indian Coast Guard on high alert.
The storm currently lays about 620 km east-northeast of Trincomalee in Sri Lanka, 770 km east-southeast of Chennai and 900 km south-southeast of Machilipatnam, the IMD stated in release in the morning today.
“The Cyclonic storm ‘Fani’ (pronounced as Foni) over Southeast Bay of Bengal and neighbourhood moved north-northwestwards with a speed of about 16 kilometres per hour in last six hours, intensified into a severe cyclonic storm. It is very likely to intensify into a very severe cyclonic storm during next 24 hours and into an extremely severe cyclonic storm during subsequent 24 hours. It is very likely to move northwestwards till May 1 evening and thereafter recurve north-northeastwards towards the Odisha coast,” the bulletin said.
The National Crisis Management Committee (NCMC), the country’s top body to deal with emergency situation, on Monday took stock of the situation arising out of cyclone ‘Fani’ and assured the state governments concerned of all assistance from the central government to face the storm.
The NDRF and the Indian Coast Guard have been put on high alert and fishermen have been asked not to venture into the sea as cyclone ‘Fani’ is expected to intensify into a ‘very severe storm’ by Tuesday, the home ministry said. The wind speed of a cyclonic storm is 80-90 kilometres per hour with wind gusting up to 100 kmph. In case of an ‘extremely severe cyclonic storm’, the wind speed goes up to 170-180 kmph and could gain the speed of 195 kmph.
Light to moderate rainfall at a few places is very likely over north coastal Andhra Pradesh and south coastal Odisha on Thursday. The precipitation is likely to increase intensity with ‘heavy to very heavy rainfall’ at isolated places over coastal Odisha and adjoining districts of north coastal Andhra Pradesh from Thursday. Light to moderate rainfall is expected at many places. Downpour at isolated places is also very likely to start over coastal districts of West Bengal from Friday, the IMD said.
The NCMC met here under the chairmanship of Cabinet Secretary P K Sinha and took stock of the situation. Chief secretaries, principal secretaries of Tamil Nadu, Andhra Pradesh, Odisha and West Bengal attended the meeting through video conference. Senior officers from the central ministries and agencies concerned also attended the meeting.
The NDRF and the Indian Coast Guard are coordinating with the state governments. The home ministry has assured the state governments to release in advance the first installment of the State Disaster Response Fund (SDRF), as per their request, a Home Ministry statement said.
During the meeting, officers of all the state governments concerned confirmed their full preparedness to deal with any emerging situation arising out of the cyclonic storm. Further, the state government highlighted that there is a seasonal ban on fishing in sea up to June 14 due to breeding season. The state governments were advised to effectively enforce this ban.
The IMD has been issuing three hourly bulletins with latest forecast to all the states concerned. The home ministry is also in continuous touch with the state governments and the central agencies concerned, the statement said. The NCMC meeting followed directions from Prime Minister Narendra Modi, who is closely monitoring the situation. The NCMC will meet again Tuesday to take stock of the situation.
MORE REPORTS