Kerala disaster could have been prevented: CAG report

Poorly-managed dams, ineffective forecast system and a general lack of seriousness have combined to make monsoon floods in Kerala one of the worst, says a report by the Comptroller and auditor general of India (CAG). 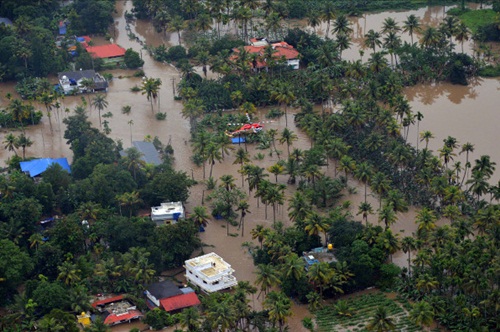 Described as one of the worst since 1924, the rains in Kerala have left over 483 people dead in floods and landslides, while 14 people are missing and 140 others were admitted to the hospitals. Thousands have been rendered homeless while several thousands have lost all their belongings.
Reports say, at least 80,000 have been rescued so far. Over 1,500 relief camps have been set up across the state that still house over one lakh people after more than a lakh returned to their homes.
The Meteorological Department had forecast that tropical depression BoB5 with towering clouds, stretching up to 10,000 metres, swirling at around 45 kilometres an hour, was brewing in Bay of Bengal as India celebrated its 72nd Independence Day. The depression dumped rain all the way from the southern tip of Myanmar to the Andaman and Nicobar Islands, Odisha, Chhattisgarh and Maharashtra.
Had an effective rain-forecasting system been in place, the state would have released water from its dams ahead of BoB5's landing, but it had no way of knowing the exact impact the weather system would likely have on the state.
Everything that happened to Kerala, CAG’s findings show, was entirely predictable and, more important, preventable, if the right tools had been available. The time to act was before the rain began to fall — and before it does again.
An audit of flood-preparedness prepared last year by the Comptroller and Auditor General (CAG) had revealed that this sequence of events played out in state after state.
In 2012, 4,862 large dams across India were ordered to prepare detailed disaster management plans. Of the 349 dams CAG surveyed, only 40, or 7 per cent of the dams, had such a plan in place. Only one had rehearsed the mandatory emergency drill.
Few states appeared to have identified the areas that would be affected in the event of a dam disaster or an emergency release. Only two of the 17 states responded when CAG asked if they had basic inundation maps, showing the areas that would be affected. Himachal Pradesh said it had maps for two of its 17 dams. Kerala had none.
Plans like these, CAG notes, could have significantly mitigated the 2016 floods in Chennai, since city authorities would have understood the impact of releasing water from the Chembarambakkam reservoir.
Only Bihar and Odisha had prepared Frequency Based Flood Inundation Maps, which allow planners to anticipate flooding events, CAG found.
Manipur, Rajasthan and Uttarakhand, the CAG report records, are the only states to check construction in flood-prone areas.
The Central Water Commission (CWC), it turned out, had been entrusted with developing the mathematical models needed to make these maps but had done nothing till March 2016. CWC has fallen behind on its commitment to install 219 telemetry stations, 310 base stations and 100 flood forecasting stations.
“Most of the telemetry stations installed” from 2007-2012, CAG found, “were non-functional”. In Kashmir, the stations lacked modern equipment, in Bihar, the equipment was stolen. These were needed to monitor flood in remote locations.
Also, according to the CAG, projects intended to bolster flood defences, are chronically delayed. Only 294 of 517 projects approved for construction between 2007 and 2017 had been found completed in the states it surveyed.
The state and central authorities continue to blame each other for delays that range from a few months to 13 years.
The CAG cites the instance of a flood-protection canal in Punjab that was approved in 2006 and the work began two years later. The project, however, had to be suspended in June 2009, when the army said it could compromise its defensive earthworks. That problem was resolved and the work began again in 2010 but only to grind to a halt because the finance department delayed funds.
Some states, it turns out, built projects without preparing detailed project reports.
This lack of seriousness has lethal consequences. India already leads the world in flood losses, data estimates by the World Resources Institutes (WRI) shows. While China has succeeded in reining-in fatalities and damage, India is getting worse by the year.
By 2030, the WRI estimates, up to $154 billion of the country’s gross domestic product could be exposed to flood risks each year, as climate change fosters more extreme weather events.
MORE REPORTS