Experts at the Alfred Wegener Institute (AWI), Helmholtz Centre for Polar and Marine Research  have recently found higher amounts of microplastic in arctic sea ice than ever before. 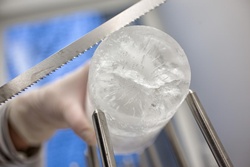