Concerned about the non-metallic waste generated by dicarded mobile devices, University of British columbia (UBC) researchers have perfected a process to efficiently separate fibreglass and resin — two of the most commonly discarded parts of a cellphone — bringing them closer to their goal of a zero-waste cellphone. 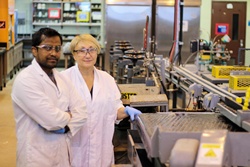 UBC Researchers have perfected a process to efficiently separate fiberglass and resin -- two of the most commonly discarded parts of a cellphone -- bringing them closer to their goal of a zero-waste cellphone / Photo credit: Clare Kiernan, UBC

It's one of the first processes to use simple techniques like gravity separation to cleanly lift organic resins from inorganic fibreglass.
Most e-waste recycling firms focus on recovering useful metals like gold, silver, copper and palladium, which can be used to manufacture other products. But non-metal parts like fibreglass and resins, which make up the bulk of cellphones' printed circuit boards, are generally discarded because they're less valuable and more difficult to process.
They're either fed to incinerators or become landfill, where they can leach hazardous chemicals into groundwater, soil and air.
"Discarded cellphones are a huge, growing source of electronic waste, with close to two billion new cellphones sold every year around the world and people replacing their phones every few years," says UBC mining engineering professor Maria Holuszko, who led the research. "The challenge is to break down models that can no longer be reused into useful materials — in a way that doesn't harm the environment."
Holuszko, who co-founded UBC's urban mining innovation centre — a unit focused on reclaiming valuable metals and other materials from electronic waste — was determined to find a better recycling solution. With PhD student Amit Kumar, she developed a process that uses gravity separation and other simple physical techniques to process cellphone fibreglass and resins in an environmentally neutral fashion.
"The key here is gravity separation, which efficiently separates the fibreglass from the resin by using the differences in their densities. The separated fibreglass can then be used as a raw material for construction and insulation. In the future, if we can find a way to improve the quality of the recycled fibreglass, it may even be suitable for manufacturing new circuit boards," said Kumar.
The researchers are now looking into developing a large-scale commercial model of the process, in partnership with Ronin8, a Richmond, British Columbia, recycling company that separates the different plastics, fibres and metals in electronic waste streams without using toxic chemicals or losing precious metals.
"Ronin8 has developed an innovative e-waste process for electronic waste that aims to address the intrinsic faults in traditional e-waste processes today," said Travis Janke, director of engineering at Ronin8. "Our vision is to achieve a zero-waste end-of-life solution for electronics, and our work with Maria and Amit at UBC has moved us closer to this reality."
The researchers say their task has taken on a new urgency in light of China's waste import ban, which took effect 1 January 2018.
"We need a better way to manage our electronic hardware recycling, and a cost-effective, environmentally responsible method of mining e-waste for valuable materials would be a good step in that direction," says Holuszko.
MORE REPORTS