With Delhi choking under its annual phenomenon of deadly smog, the Centre and Chief Minister Arvind Kejriwal could well take note - China has shown its earnestness about tackling air pollution by building a huge experimental air purification tower in the northern region of the country. 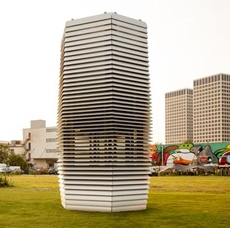 It has brought a noticeable improvement in air quality, according to the scientists leading the project – and it is only the first of several such towers planned around the country.

The experimental air purification tower, claimed to be the world's biggest air purifier by its operators, has been built in the city of Xian in Shaanxi province.

Currently being tested by the Institute of Earth Environment at the Chinese Academy of Sciences, it has shown tremendous potential in fighting air pollution.

The head of the research, Cao Junji, said on Tuesday that improvements in air quality had been observed over an area of 10 sq km in the city over the past few months and the tower has managed to produce more than 10 million cubic metres of clean air a day since its launch.

"The tower has no peer in terms of size ... the results are quite encouraging," Cao said, adding that on severely polluted days the tower was able to reduce smog close to moderate levels.

The system works through greenhouses covering about half the size of a soccer field around the base of the tower. Polluted air is sucked into the glasshouses and heated up by solar energy. The hot air then rises through the tower and passes through multiple layers of cleaning filters.

One of the most interesting features of the tower is that it requires very little power to run as it largely relies on solar energy.

"It barely requires any power input throughout daylight hours. The idea has worked very well in the test run," Cao said.

The air purifier in Xian, big as it is, is test version of a much bigger smog tower that is expected to be built in other Chinese cities. Such a full-sized ait purification tower would measure up to 500 metres tall with a diameter of 200 metres, The South China Morning Post said, citing a patent application the Cao and his team of researchers filed in 2014.

Xian can experience heavy pollution in winter, with much of the city's heating relying on coal.

The tower's operators say, however, that the system still works in the cold months as coatings on the greenhouses enable the glass to absorb solar radiation at a much higher efficiency.

Cao's team set up more than a dozen pollution monitoring stations in the area to test the tower's impact.

The average reduction in PM2.5 – the fine particles in smog deemed most harmful to health – fell 15 per cent during heavy pollution.

Cao said the results were preliminary because the experiment is still ongoing. The team plans to release more detailed data in March with a full scientific assessment of the facility's overall performance.

The Xian smog tower project was launched by the academy in 2015 and construction was completed last year at a development zone in the Chang'an district.

What was previously thought to be the largest smog tower in China was built last year by Dutch artist Daan Roosegaarde at 798, a creative park in Beijing. The seven-metre (23-feet) tall tower produced about eight cubic metres (282.5 cubic feet) of clean air per second. It was entirely powered by electricity, most of which is generated by coal-fired power plants in China.

Cao, however, said their tower in Xian required little power to run.

''It barely requires any power input throughout daylight hours. The idea has worked very well in the test run,'' he said.

Several people in Xian told the South China Morning Post they had noticed the difference since the tower started operating.

China, meanwhile, has been able to curb pollution levels in Beijing where concentrations of PM2.5 – tiny particles in smog that could pose the greatest health risks – dropped 54 per cent from a year earlier in the fourth quarter of 2017.

Authorities have witnessed similar success in the fight against air pollution in 27 other surrounding cities, thanks to a government policy that forced people to switch from coal to natural gas, according to a report from Greenpeace East Asia.