Higher coal use in Asia could increase water stress

Coal burning, despite recent signs of having peaked in China and pledges made at the Paris Climate talks in December, remains the primary source of electric power in Asia. In both China and India, it's responsible for the lion's share of human-made sulfur dioxide (SO2) emissions, which drive up concentrations of sulfate aerosols in the atmosphere. These aerosols not only endanger public health in the region but also contribute to local and global climate change. 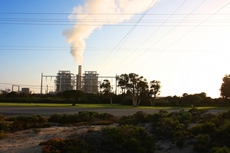 Just how much climate change will depend on Asia's energy choices in the years and decades to come.

At one extreme, economic growth and energy demand in China, India, and other fast-growing Asian nations would lead to rapid increases in coal use, resulting in more significant climate impacts; at the other, Asia would gradually lessen these impacts by shifting from coal to cleaner burning fuels such as natural gas, and low-carbon energy technologies such as wind turbines and photovoltaics.

Now a new study in the Journal of Climate assesses the climate's likely response to aerosol emissions at both extremes, resulting in likely lower and upper bounds for the impact of Asian aerosols on regional surface temperature and rainfall.

According to the study, a high coal-use future - in which today's emissions of sulphur dioxide and black carbon aerosols from Asia's industry, energy, and domestic sectors are set to twice their year-2000 values from 2030 to 2100 - would entail significant local and global climate impacts.

The increased aerosol levels would have a large cooling effect throughout the Northern Hemisphere, partially offsetting warming from greenhouse gas emissions (including increased carbon dioxide emissions associated with coal burning, which the study did not model). Significant cooling would also be felt especially in South and East Asia.

''Much of these results are related to the impact of sulphates on clouds, which lowers surface temperatures indirectly by increasing the clouds' reflectivity,'' explains study co-author Chien Wang, a senior research scientist in the MIT Joint Program on the Science and Policy of Global Change and the MIT Department of Earth, Atmospheric and Planetary Sciences. These aerosols may also lower surface temperatures by reflecting sunlight skyward.

''For the high-emissions scenario, we found reductions in rainfall across much of Asia, especially East Asia (including China) and South Asia (including India), and a remote effect leading to a possible increase in rainfall in Australia as well as a suppression of rainfall in the Sahel region of Africa,'' says Benjamin

Grandey, a research scientist in Wang's research group at the Singapore-MIT Alliance for Research and Technology. ''We see more reductions in rainfall than increases, especially in regions already struggling with water resources.''

Unlike many previous studies, their modelling framework included a three-dimensional, dynamic representation of the oceans that enables more accurate projections of climate responses to aerosols.

The study was funded primarily by the National Research Foundation of Singapore through the Singapore – MIT Alliance for Research and Technology, with additional support from the US National Science Foundation, Department of Energy, Environmental Protection Agency, and A*STAR Computational Resource Centre of Singapore.