India this week brought together 125 nations under the banner of the ‘Global South’ even as New Delhi sought to champion the cause of these nations that have been failed by the United Nations, which it referred to as “a frozen 1945-invented mechanism”. 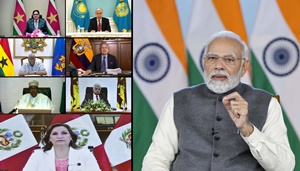 The two-day ‘Voice of Global South’ summit that was held under the theme – 'Unity of Voice, Unity of Purpose' – concluded on Friday. It was held in a virtual format. This was the first time India, currently the G20 president, organised such a meeting of the Global South, comprising low-income countries.
As many as 125 countries participated in the summit, which included 29 countries from Latin America and Caribbean, 47 countries from Africa, seven from Europe, 31 from Asia and 11 from Oceania. China and Pakistan were absent.
Prime Minister Narendra Modi, in his opening remarks, said: “To address this geopolitical fragmentation, we urgently need a fundamental reform of the major international organisations, including the United Nations Security Council and the Bretton Woods Institutions (World Bank and International Monetary Fund). These reforms should focus on giving voice to the concerns of the developing world and reflect the realities of the 21st century."
“We want a globalisation that does not lead to unequal distribution of vaccines or over-concentrated global supply chains … We, the developing countries, are also concerned about the increasing fragmentation of the international landscape. These geopolitical tensions distract us from focusing on our development priorities. They cause sharp swings in international prices of food, fuel, fertilizers and other commodities,” PM Modi said.
PM Modi also announced a number of new initiatives by India in connection with the Global South Summit. These include ‘Aarogya Maitri’ initiative, Global South Centre of Excellence, Global South Science and Technology Initiative, Global South Young Diplomats Forum, and Global South Scholarships.
External affairs minister S Jaishankar on Friday said that the UN has been ‘unable to articulate the wider concerns’ of the Global South and has become a "frozen mechanism".
“Where the United Nations is concerned, a frozen 1945-invented mechanism is simply unable to articulate the wider concerns of its membership.” External Affairs Minister S Jaishankar said,
“Some powers have been singularly focused on their own advantage, to the exclusion of the well-being of the international community. And the G20, reflecting the composition of its membership, has had its own particular focus. This is what we are seeking to change," he added.
Stressing the point that developing countries are now facing monumental challenges concerning costs and availability of fuel, food and fertilisers, unsustainable debt, unviable projects, trade barriers, contracting financial flows and climate pressure among others, Jaishankar said: “No matter how hard the challenges, we must move forward together.”
“It is only by acting as one do we stand any chance to succeed; and succeed we must. We must fully recognise the interdependence and cooperation that is expressed by the motto of our presidency: 'One Earth, One Family, One Future'. Your voices will guide and inspire us throughout this process," he added.
The minister also said that the range of discussions that were held during the two-day summit will be highlighted during India’s G20 presidency.
Closing the summit on Friday, PM Modi stressed the fact that by coming together, all these countries can “set the global agenda”.
“Our effort will be to distill action-points for the Global South — both for what we can do together and what we can seek collectively on the global agenda. The Voice of the Global South needs to set its own tone. Together, we need to escape the cycle of dependency on systems and circumstances which are not of our making,” he added.
“We all agree on the importance of South-South Cooperation, and collectively shaping the global agenda,” he highlighted Friday.
In an effort to create a parallel supply chain in the wake of the volatile geopolitical situation, Modi said it is imperative that all these countries come together in creating a robust connectivity framework thereby creating effective value chains.
“We all agree on the importance of investing in connectivity infrastructure. We also need to diversify global supply chains, and find ways to link developing countries to these value chains,” the PM said.
Speaking to reporters on Friday about the outcome of the summit, which also saw parallel meetings between all the foreign ministers, finance ministers, health ministers and others, foreign secretary Vinay Kwatra said: “We undertook a unique initiative… a unique beginning."
“One thing which came across clearly during the summit was the need for articulating the voice of Global South in international institutions and for reforming them for a balanced representation of the developing world," he added.
MORE REPORTS