China launches a second module to its space station

China on Sunday launched the Wentian lab module, its second space station module, to its under-construction space station, which it hopes to operationalise with the launch of yet another module. 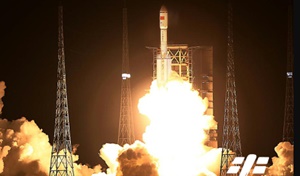 The Wentian module, weighing 23 tonnes, was sent into space using Long March-5B Y3 rocket from the Wenchang Spacecraft Launch Site in Tiangong, in south China’s Hainan province.
The module, bound for the under-construction Chinese space station, is carrying three astronauts.
The Wentian module is the second of the three modules required to complete the Tiangong space station, launched last year in April.
A third module, set for launch later this year, will  complete the first phase of construction of China’s permanent space station in Earth’s low orbit.
“This is the first time the Long March-5B rocket will undertake a rendezvous and docking mission. It will send the lab module to dock with the core module,” Chinese state media quoted one of the engineers associated with the project as saying.
The Wentian module is a working cabin that includes three sleeping areas and one sanitary area. It is expected to accommodate six astronauts at a time, particularly when the interchange of astronauts from different space missions happens.
Wentian has a flexible solar panel on it that will generate an average of 430 kiloWatt hours per day. It is estimated that the power generation of Wentian could have easily supported the power demand of an average Beijing household for more than a month.
Reportedly, the three Chinese astronauts, Chen Dong, Liu Yang, and Cai Xuzhe, inside the space station, will also become the first crew members to float into the station’s new module.
China’s third and final module for the space station named Mengtian module is expected to be launched in October this year. While the Wentian and Mengtian modules will be on the side, the Tianhe module will be in the centre, completing the T-shaped space station.
It is pertinent to note that the International Space Station (ISS) has whopping 16 modules. With China nearing the completion of its space station, ISS and Tiangong will be the two active space stations in Earth’s orbit. The former is expected to retire by the end of this decade.
China had planned to launch six major missions before the end of the year to complete its Tiangong space station, which space officials say could soon link up with a powerful telescope and host commercial activities and international astronauts.
It will also launch the Tianzhou 5 cargo and Shenzhou 15 crewed missions late in the year, when the Tiangong station will host its first crew rotation with the Shenzhou 14 astronauts welcoming the newcomers aboard, thanks to extra living quarters in the Wentian module.
Once fully assembled, Tiangong will host six-month-long crewed missions during which astronauts will conduct an array of experiments and outreach activities. The experiments will focus mainly on life sciences, microgravity research, astronomy, Earth science and new materials and space technology, Chinese space officials have said.
MORE REPORTS