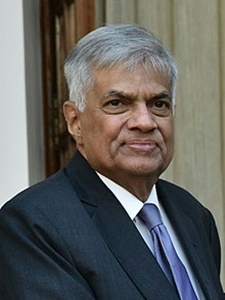 And, as the country plunged into an unprecedented crisis, President Gotabaya Rajapaksa reportedly fled the country before a sea of protesters stormed his official residence demanding his resignation.
Hours after a meeting with political leaders in Saturday, the prime minister, who is also under immense pressure to step down, tweeted that he is also stepping down.
Taking to Twitter, Wickremesinghe said that to ensure the continuation of the govt and safety of all citizens, he accepts 'the best recommendation of party leaders today, to make way for an all-party govt'.
Sri Lanka’s economy is facing its worst economic crisis in over 70 years with inflation rising to record levels, food prices skyrocketing and government coffers running dry.
Sri Lanka’s economy has been faltering since 2020, which the government blamed the debilitating pandemic. Experts, however, blame the current crisis on political mismanagement and racking up debts with China.
The island nation first defaulted on its debts in May. On Sunday, BBC quoted energy minister Kanchana Wijesekera as saying that the country had only enough petrol left for less than a day under regular demand.
Sri Lanka is currently in negotiations with the International Monetary Fund (IMF) to save the economy. IMF officials visited the capital Colombo between 20 and 30 June and held discussions with government officials on economic reforms and policies that could be supported by an IMF Extended Fund Facility arrangement.
But, Wickremesinghe told parliament that the country was now in talks as a bankrupt nation and that the negotiations with the IMF to revive the country's ‘collapsed’ economy were ‘difficult.’ He said Sri Lanka will have to "face a more difficult and complicated situation than previous negotiations" now.
“Due to the state of bankruptcy our country is in, we have to submit a plan on our debt sustainability to (the IMF) separately,” the PM said. Once the IMF is satisfied with the plan, an agreement will be drawn at the staff level, he said, adding that "this is not a straightforward process".
Wickremesinghe said he hoped to submit the report on debt restructuring and sustainability to the IMF by August. Once there is an agreement between IMF and Sri Lanka, a comprehensive loan assistance program would be prepared for a period of four years, CNN reported quoting the prime minister.
Last week, the IMF had said more work was required to repair Sri Lanka’s runaway fiscal deficit before any agreement is worked out. Sri Lanka needs to address its balance of payments crisis before IMF agrees on a funding arrangement.
Sri Lanka's total foreign debt now stands at $51 billion.
Sri Lanka, meanwhile, is in talks with friendly countries like India, Japan, and China to form an aid consortium amid ongoing talks with the IMF. Till now, India has provided around $3 billion worth of assistance to Sri Lanka, including a $400 million swap and credit line totalling $1.5 billion.
On Wednesday, Sri Lankan President Gotabaya Rajapaksa had tweeted that he had sought assistance from Russian President Vladimir Putin, asking him for an “offer of credit support to import fuel."
In the emergency all-party meeting on that followed, Lanka’s political party leaders both Gotabaya and Ranil to step down immediately to pave the way for an interim administration until elections are held. It was also decided to appoint the Speaker of Parliament to act as President for 30 days and for the remaining period, to appoint a parliamentarian who commands the trust of the majority of legislators.
On Saturday evening, a mob stormed into Prime Minister Ranil Wickremesinghe's home in Colombo and set it ablaze, a police official said.
Earlier in the day, hundreds of thousands of angry protesters stormed into the president’s official residence in central Colombo’s high-security Fort area and into Temple Trees, the PM’s official residence, in a show of power. Gotabaya, who was facing calls for resignation since March, was using the President’s House as his residence and office since protesters came to occupy the entrance to his office in early April.
In a shocker, protesters who stormed President Gotabaya Rajapaksa`s house on Saturday amid the country`s worst economic crisis claimed to have recovered a large sum of money from the mansion, local media reported. Sri Lanka`s Daily Mirror newspaper reported that the recovered money was handed over to the security units.
In one of the videos on social media, protesters are seen counting the currency notes that they claimed were unearthed from the President`s official residence, said the media outlet.
Sri Lankan authorities said that the situation can only be understood once they probe it and come up with relevant facts. Chief of Defence Staff (CDS) General Shavendra Silva urged all citizens to give their support to the armed forces and the police in order to maintain peace in the country, as per the media portal.
Meanwhile, investment promotion minister, Dhammika Perera, also stepped down, becoming the fourth minister to resign from the cabinet after Harin Fernando, Manusha Nanayakkara and Bandula Gunawardena over the last two days.
India said it was "trying to help" Sri Lanka through its present economic crisis. External affairs minister S Jaishankar also made it clear that there was "no refugee crisis" as of now in the wake of the unrest in the neighbouring country.
The United States has urged Sri Lanka's politicians to come forward and "work quickly" to achieve long-term solutions to address the people's discontent.
MORE REPORTS