The Nobel Prize in Literature for 2021 has been awarded to novelist Abdulrazak Gurnah “for his uncompromising and compassionate penetration of the effects of colonialism and the fate of the refugee in the gulf between cultures and continents.” 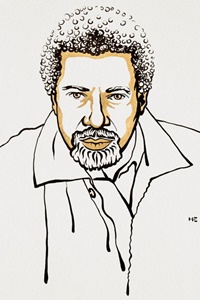 The prize is awarded by the Swedish Academy and is worth 10 million Swedish crowns ($1.14m / £840,000).
In a brief conversation, recorded just after he heard the news, Abdulrazak Gurnah’s surprise at receiving the Nobel Prize in Literature is evident. “I was just thinking ‘I wonder who’ll get it’”, says Gurnah: “I thought it was a prank, I really did.”
Gurnah, 73, is the author of 10 novels, including Paradise and Desertion.
He said how grateful he was to the academy, adding: "It's just great - its just a big prize, and such a huge list of wonderful writers - I am still taking it in.
"It was such a complete surprise that I really had to wait until I heard it announced before I could believe it."
Paradise, published in 1994, told the story of a boy growing up in Tanzania in the early 20th Century and was nominated for the Booker Prize, marking his breakthrough as a novelist.
"Abdulrazak Gurnah's dedication to truth and his aversion to simplification are striking," the Nobel Committee for Literature said in a statement.
"His novels recoil from stereotypical descriptions and open our gaze to a culturally diversified East Africa unfamiliar to many in other parts of the world."
"[His] characters find themselves in a hiatus between cultures and continents, between a life that was and a life emerging; it is an insecure state that can never be resolved."
Gurnah was born in 1948 and grew up on the island of Zanzibar in the Indian Ocean but arrived in England as a refugee in the end of the 1960s. He has published ten novels and a number of short stories. The theme of the refugee’s disruption runs throughout his work, the Nobel Prize Committee stated in its release.
MORE REPORTS