The Group of Seven (G7) world’s richest nations on Saturday agreed on a minimum global corporate tax rate to close cross-border tax loopholes used by some multinational corporations. The G7 hopes to reach a final agreement at the July gathering of the expanded G20 finance ministers group. 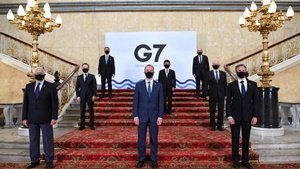 The landmark deal reached by United States, Britain and other large, rich nations at the meeting of G7 finance ministers in London, aims to squeeze more money out of multinational companies such as Amazon and Google and reduce their incentive to shift profits to low-tax offshore havens.
G7 advanced economies have agreed to back a minimum global corporate tax rate of at least 15 per cent that would help tap hundreds of billions of dollars in corporate tax by governments left cash-strapped by the Wuhan virus (coronavirus) pandemic.
“We … commit to a global minimum tax of at least 15 per cent on a country by country basis,” the G7 said in a statement at the conclusion of their London meeting.
"Under the principles of the landmark reforms, the largest global firms with profit margins of at least 10 per cent will be in scope – with 20 per cent of any profit above the 10 per cent margin reallocated and then subjected to tax in the countries where they make sales," British Treasury Secretary Rishi Sunak posted a Twitter message.
The move, he said, will create a more level-playing field for UK firms and help crack down on tax avoidance.
US Treasury Secretary Janet Yellen said the agreement “provides tremendous momentum” for reaching a global deal that “would end the race-to-the-bottom in corporate taxation and ensure fairness for the middle class and working people in the US and around the world.”
The meeting of finance ministers comes ahead of an annual summit of G7 leaders scheduled for 11-13 June in Cornwall, England.
Part of the agreement Saturday is that other countries would repeal their unilateral digital taxes in favour of a global agreement.
Major economies are aiming to discourage multinationals from shifting profits – and tax revenues – to low-tax countries regardless of where their sales are made.
Increasingly, income from intangible sources such as drug patents, software and royalties on intellectual property has migrated to these jurisdictions, allowing companies to avoid paying higher taxes in their traditional home countries.
While global tech giants like Facebook welcomed the deal to set the taxfloor low, campaign group Oxfam slammed the deal as inadequate.
“It’s absurd for the G7 to claim it is ‘overhauling a broken global tax system’ by setting up a global minimum corporate tax rate that is similar to the soft rates charged by tax havens like Ireland, Switzerland and Singapore. They are setting the bar so low that companies can just step over it,” Oxfam said.
“Stopping the explosion in inequality caused by Covid-19 and tackling the climate crisis will be impossible if corporations continue to pay virtually no tax …. This is not a fair deal.”
The Group of 7 is an informal grouping of countries such as Canada, France, Germany, Italy, Japan, the UK and the United States. European Union representatives also attend. Its decisions are not legally binding, but leaders can use the forum to exert political influence.
MORE REPORTS