The Federal Open Market Committee (FOMC) of the US Federal Reserve has decided to lower the target range for the federal funds rate to 0 to 0.25 per cent, in the face of the COVID-19 (coronavirus) outbreak that has harmed communities and disrupted economic activity in many countries, including the United States. 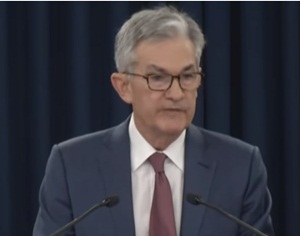 The FOMC expects to maintain this target range until the economy has weathered recent crisis and is on track to achieve its maximum employment and price stability goals. This action, according to Fed, will help support economic activity, strong labor market conditions, and inflation returning to the FOMC’s symmetric 2 per cent objective.
The Fed also decided to increase its holdings of Treasury securities by at least $500 billion and its holdings of agency mortgage-backed securities by at least $200 billion in the coming months. The FOMC will also reinvest all principal payments from the Federal Reserve's holdings of agency debt and agency mortgage-backed securities in agency mortgage-backed securities.
In addition, the Fed committee has recently expanded its overnight and term repurchase agreement operations. The FOMC will continue to closely monitor market conditions and is prepared to adjust its plans as appropriate.
The Fed panel said it would continue to monitor the implications of incoming information for the economic outlook, including information related to public health, as well as global developments and muted inflation pressures, and will use its tools and act as appropriate to support the economy.
In a related move, the Federal Reserve also announced measures related to the discount window, intraday credit, bank capital and liquidity buffers, reserve requirements, and—in coordination with other central banks—the U.S. dollar liquidity swap line arrangements.
Any future changes in the timing and size of monetary policy, will depend on the realised and expected economic conditions relative to its maximum employment objective and its symmetric 2 per cent inflation objective, Fed stated in a release.
The Fed move, in coordination with its global counterparts, including European Central Bank (ECB) and the Bank of Japan (BoJ), will offer cheap dollars aimed at combating the coronavirus pandemic that has roiled markets and paralysed large parts of the world economy.
Bank of England and Australia’s central bank also joined in by pumping extra liquidity into strained financial systems and said they would announce more policy steps later.
The People’s Bank of China (PBoC), which has rolled out powerful stimulus measures since the outbreak began in the country’s Hubei province late last year, kept its rates steady.
Five other central banks, including Reserve Bank of India, opened swap lines to make it easier to provide dollars to their financial institutions, to calm markets.
MORE REPORTS