Queen Elizabeth II on Thursday formally approved the Brexit Bill that was passed by both Houses of parliament, facilitating Britain’s departure from the European Union at the end of this month. 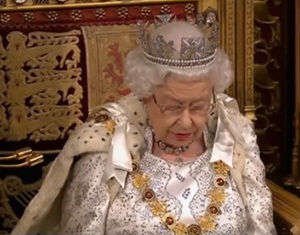 “Her Majesty the Queen has now granted #RoyalAssent to the #BrexitBill which therefore becomes the #BrexitAct,” Brexit secretary Steve Barclay said on Twitter. “Enshrined in law, this enables the UK to leave the EU on 31st Jan.”
The queen’s assent came hours after the bill completed its passage through Parliament by getting approval from the House of Lords.
The Upper House of British parliament on Wednesday approved the terms of the country's divorce from the European Union and sent the Brexit bill for royal assent by the queen.
The House of Lords suggested some changes to the bill, including on the rights of EU citizens and child refugees after Brexit, but the Upper House, where Johnson's Conservatives have a large majority, rejected all amendments, including on the rights of EU citizens and child refugees after Brexit.
The House of Commons, the lower House of parliament, had already approved the EU Withdrawal Agreement Bill, which ratifies the divorce deal that Prime Minister Boris Johnson struck with Brussels last year.
The European Parliament is expected to vote on the Brexit deal next week but it could only be a formality as the divorce deal has already been accepted by European Parliament.
For Prime Minister Johnson, who took office last year promising to end several years of political wrangling that had divided the country and paralysed successive governments, the passage of the bill is a huge achievement.
Johnson had to make fresh deal with the EU after parliament rejected an earlier deal struck by his predecessor Theresa May in 2018. The Commons had rejected it three times, forcing her to resign.
Johnson agreed changes to the text with Brussels, only to be defeated again by MPs unable to agree on the timetable for turning the deal into law.
Johnson accused lawmakers of trying to frustrate the result of the landmark 2016 referendum vote for Brexit and forced a snap election last month.
Johnson then opted for fresh election and returned to office with a thumping majority, which changed the course.
"The British people have waited for more than three years to get Brexit done. Passing the WAB allows us to do this in an orderly way on January 31," Johnson's spokesman said.
The Brexit deal protects the rights of EU citizens, makes special trading arrangements for the British province of Northern Ireland, and settles the UK's EU debts.
It also paves the way for transition phase until 31 December, in which UK-EU ties will remain largely the same while both sides try to agree a new trading and security partnership. But it leaves the shape of future relationship unresolved.
Brussels has warned that it is impossible to address all issues in that time, suggesting a more limited deal is now likely.
Despite the free flow of commerce between Britain and the 28-member European Union, London feels closer to its largest trading partner, the United States.
MORE REPORTS