Aung San Suu Kyi, who led Myanmar’s fight against military rule is now preparing to travel to the Netherlands to fight charges of genocide against her country at the International Court of Justice at the Hague. 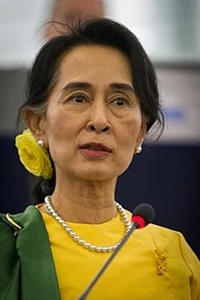 The armed uprising by the Rohingya Muslims in Myanmar that forced the authorities to clamp down on atrocities perpetrated by the migrants on locals in the country and the subsequent adverse publicity campaign by the rights groups hurt the stature of Nobel Peace Prize laureate Aung San Suu Kyi as a democracy icon.
Despite the accusations by vested interests overseas, Suu Kyi still enjoys overwhelming support at home, where her image is undented by accusations of complicity in atrocities.
On Sunday, several hundred people gathered in downtown Yangon for the third in a series of rallies organised by supporters since the announcement was made that she would personally fight the charges.
“Aung San Suu Kyi is the bravest leader in the world,” Saw Phoe Kwar, a reggae singer known for his hits ‘Love Each Other’ and ‘Stop the Hate’, told the crowds, who waved flags and chanted.
“We must show our unity,” said protest organiser Aung Thu. “If a country’s leader says a lemon is sweet, we have to say it is sweet.”
More than 730,000 Rohingya Muslims have fled to neighbouring Bangladesh since a 2017 crackdown by Myanmar’s military, following wanton attacks carried out by the immigrants on local Buddhist majority.
While the Bangladeshi immigrants carried out atrocities on the locals with an intent to drive them out of their homes and annex the province for themselves, UN investigators say the military operation was carried out with “genocidal intent”.
Buddhist majority Myanmar denies genocide, saying the army was fighting militants who attacked security posts.
Myanmar’s myriad ethnic minority groups are seeking more autonomy and are angry that Suu Kyi, despite her democratic image, is not supportive of the autonomy demand.
The military is now fighting diverse groups in the border and these groups have outside supporters such as the Organisation of Islamic Countries.
The ICJ trial follows a law suit filed by Gambia, a West African country with backing from the 57-member OIC, last month against Myanmar for genocide, including mass murder and rape.
The anti-Myanmar campaign has only helped boost support for the government, which said it was “heartening to see that people from all walks of life ... are expressing their strong support for the State Counsellor and her leadership in the endeavours to contest the case at the ICJ.”
It also brought a revival of an online ‘Stand with Daw Aung San Suu Kyi’ campaign, with Facebook users changing their profile pictures to images of the state counsellor.
It is also one issue that has united the civilian government and the military, which ruled for half a century before Suu Kyi won an election by a landslide in 2015.
MORE REPORTS