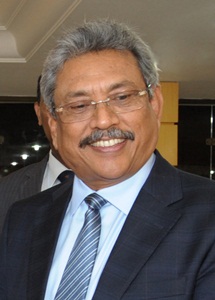 Rajapaksa, the controversial 'war hero' who ended Lanka's 3-decade- long bloody civil conflict, took his party SLPP to victory securing 52.25 per cent vote (6,924,255) against Premadasa’s 41.99% vote share.
Gotabaya Rajapaksa will be sworn in as Sri Lanka’s 7th executive president today in the historic city of Anuradhapura, the Sri Lanka Podujana Peramuna (SLPP or People’s Party) said.
The Tamil and Muslim minorities in the north-eastern districts, who are opposed to Rajapaksa, are reported to have voted mostly in favour of Premadasa. But that did not make up for the backing he lost to Rajapaksa in the Sinhala-majority areas, especially after the Easter Sunday attack on churches by Muslim terror group.
“I am the President of not only those who voted for me but also those who voted against me and irrespective of which race or religion they belong to,” Mr. Rajapaksa said, following his victory. “I am deeply committed to serve all the people of Sri Lanka.”
Meanwhile Prime Minister Ranil Wickremesinghe has said he would discuss the possibility of a parliamentary election with the Speaker and party leaders soon.
I am grateful for the opportunity to be the President, not only of those who voted for me, but as the President of all Sri Lankans. The trust you have invested in me is deeply moving and being your president will be the greatest honor of my life -Let’s put our vision into action!
Premadasa, 52, conceded the presidential election to his rival even before the official results were announced by the Elections Secretariat. He also stepped down as the deputy leader of the ruling United National Party (UNP) with immediate effect.
On Sunday, three cabinet members, including finance minister Mangala Samaraweera, resigned.
Gotabaya, a former defence secretary and younger brother of former President Mahinda Rajapaksa, is a controversial figure in the island nation. He is accused of serious war crimes during the final phase of war with Tamil separatist guerillas LTTE in 2008-09.
His disdain for free media, activities of NGOs and human rights are well known across Sri Lanka and even beyond.
Gotabaya renounced his American citizenship only a few months before the Presidential elections to contest the polls. The Opposition alleges that he still holds a US passport and has made false claims that he is no longer a US citizen.
The people who know him closely say he is a man of action who does not believe in talking.
During his elder brother's presidency, Gotabaya was credited with developing the island nation as in charge of urban development. In a Buddhist-majority country, Gotabaya is liked by the Sinhalese and the all-powerful clergy.
During his election campaign, he deftly played the Sinhalese and "nationalism" card to win over the support of the majority community.
The results prove that majority Sinhalese have backed him in large numbers and the minorities — Tamils and Muslims have voted against him.
Gotabaya has promised that he will not entertain a family rule. But, critics say he will have to appoint his brother Mahinda Rajapaksa as the next Prime Minister and other family members soon to take over the administration of the country.
Gotabaya is known as a pro-China leader and his close links with the US are also well known.
Since the Tamil issue is a major obstacle in India-Sri Lanka relations, how Gotabaya, a known anti-Tamil leader, will convince his giant neighbour about his commitment to free and fair administration is a million-dollar question.
Even though Gotabaya has promised India that he will be sympathetic towards the Tamil cause and wants to maintain the best relations with India, one has to wait and watch his next moves.
“The entire Rajapaksa family is too close to China. They will have to maintain a good relationship with India because of political and geographical compulsions. But, he is a tough man and can't be manipulated by anyone. For him, personal interest and majority Sinhalese interests are paramount," said a senior political leader who is close to his brother.
China has invested heavily in Sri Lanka during the 10-year rule of Gotabaya’s brother between 2005 and 2015. Many of its project slowed down during the five year-rule of UNP between 2015 and 2019. His win is likely to boost Chinese business in Sri Lanka and many halted projects are likely to resume soon.
Many Sri Lankan media professionals, NGOs, civil society leaders have already expressed shock over his victory. They fear that he may derail the investigations into war crimes and also alleged corruption of his family.
Gotabaya may be a man of his own mind, but his brother Mahinda Rajapaksa is a bigger leader than him in Sri Lanka. Many fear that Mahinda will now take over as backseat driver in the role of the Prime Minister.
The beautiful emerald isle Sri Lanka is living through interesting times. Some say Gotabaya will put the nation back on track of development, while some fear that the island nation will be divided further on the lines of race and religion under his rule.
Get the best of News18 delivered to your inbox - subscribe to News18 Daybreak. Follow News18.com on Twitter, Instagram, Facebook, Telegram, TikTok and on YouTube, and stay in the know with what's happening in the world around you – in real time.
MORE REPORTS