Bolivia’s political crisis took a dramatic turn on Tuesday when a leading lawmaker assumed presidency, even as ousted leader Evo Morales urged his supporters in the legislature to battle on from his exile in Mexico. 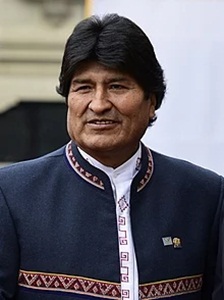 “I assume the presidency immediately and will do everything necessary to pacify the country,” the lawmaker, Senator Jeanine Añez Chavez, told members of the assembly.
Supporters of ousted President Evo Morales refused to take part in the legislative session, but, minutes after she spoke, Bolivia’s highest constitutional court issued a ruling that backed her assumption of power.
It was not immediately clear whether Añez’s has the necessary political backing from the opposition and the OAS and her assumption of presidency would end the conflict.
She is the highest-ranking politician in the line of succession after Morales and other top officials stepped down.
Ousted Bolivian President Morales reaches Mexico to take political asylum.
Two days after resigning amid mounting protests over his fraud-stained re-election to a fourth term, Bolivia's ousted President Evo Morales reached Mexico City to take political asylum in Mexico.
Mexico’s foreign minister Marcelo Ebrard welcomed Morales  as a Mexican air force plane carrying the elected president of Bolivia touched down at the Mexico City international airport, saying Morales was the victim of a "coup."
Morales thanked Mexico’s leftist President Andres Manuel Lopez Obrador, saying "he saved my life." He vowed his flight into exile would not be the end of the story.
"As long as I am alive, I will remain in politics. The struggle goes on," he told a large crowd of journalists gathered at the airport.
Morales, a leftist and Bolivia's first indigenous president, defended his record of bettering living conditions for poor and indigenous Bolivians, and said "there will only be peace when social justice is achieved for all."
Morales led Bolivia for more than 13 years before mounting protests over his fraud-stained fourth re-election on 20 October forced him to resign.
Morales, 60, and member of the "pink tide" of leftist leaders held sway across much of Latin America in the 2000s.
However, he was forced to step down after losing the backing of the military and police amid weeks of increasingly violent protests over his constitutionally questionable re-election.
The lead-up to the election of October 20 was fraught with tension. Morales had sought a fourth term, for which he got judicial sanction. He beat Mesa by over 10 percentage points, but Mesa refused to accept the result. The Organisation of American States (OAS), which is influenced by the US, found irregularities in the counting of votes. It said it was surprised by the “drastic and hard-to-explain change in the trend of the preliminary results”, but offered no evidence for this claim. The Centre for Economic and Policy Research found no irregularities.
Nonetheless, key US officials and the Bolivian oligarchy tried to nullify the results. Based on this, the right-wing called upon its supporters to flood the streets, and the police forces decided to mutiny. The US and the OAS played a key role in the ‘coup’.
A host of top officials resigned along with him, including his vice president and the heads of both houses of Congress, leaving the country with no clear leader and torn by looting and riots.
The constitutional next-in-line, deputy senate speaker Jeanine Anez, has pledged to call fresh elections.
MORE REPORTS