Canadian Prime Minister Justin Trudeau looked set to remain in power although without a majority in parliament after the Liberal Party won or were leading in 156 out of 338 seats in Monday's vote, according to Elections Canada. 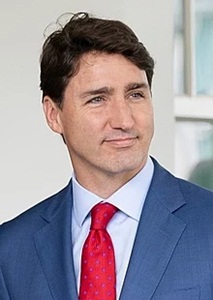 The Liberals are far short of the 170 seats needed for a clear majority and would require support of smaller parties to form government.
Prime Minister Justin Trudeau’s Liberals won most seats in the hard-fought elections while his main opposition, the Conservatives led by Andrew Scheer were on track to secure at least 121 seats.
This means that Trudeau will require the support of a smaller left-leaning party to remain in power.
Both parties had been hoping to gain 170 seats or more in the 338-seat Parliament, which would grant them the right to form a majority government.
Trudeau’s Liberals were elected or were leading the race in more than 156 out of over 300 electoral districts that were reporting by 12 am EDT (0400 GMT). The Conservatives were on track to secure at least 121 seats.
With polls closed across the country, the Canadian Broadcasting Corporation has projected a Liberal minority government.
Whether it will be a minority or majority government remains to be seen.
Around 27.4 million Canadians were eligible to vote at polling stations located in six different time zones.
Trudeau, who won by a landslide in 2015, is now fighting to secure a second term amidst scandals, including his handling of a corruption case involving a major Canadian construction company as well as his decision to nationalise a controversial oil pipeline project.
Trudeau, son of the liberal icon and late Prime Minister Pierre Trudeau, is viewed as one of the last remaining progressive leaders in the world’s major democracies.
His rival and Conservative leader Andrew Scheer had pledged to roll back several environmental protection measures, including Trudeau’s carbon tax to discourage fossil fuel use. He had also promised to balance the federal budget.
Scheer’s campaign, however, was shaken by revelations that he holds dual US-Canadian citizenship and that his party hired a communications firm to go after the right-wing People’s Party of Canada, led by Maxime Bernier.
Although much of the focus was on the major candidates, the environment and healthcare also emerged as top issues.
Should Trudeau fail to win a majority of seats in Parliament, he will have to rely on support from smaller parties like the Green Party and the New Democratic Party (NDP), led by Jagmeet Singh – the first non-white leader of a federal party in Canada.
Should Scheer’s Conservatives are ahead after the final counting, it’s possible they would team up with Yves-Francois Blanchet’s Bloc Quebecois, the nationalist party of the French-speaking province of Quebec, in a minority government.
Trudeau (47) was endorsed by former US President Barack Obama in the final stretch of the campaign.
President Donald Trump also congratulated Trudeau “on a wonderful and hard fought victory” via Twitter.
NDP Leader Jagmeet Singh said he had spoken with Trudeau and vowed to “work hard to deliver on the country's priorities.”
The Greens, who have assailed Mr. Trudeau for not doing enough to combat climate change, also made gains on Monday.
The Canadian dollar was little changed after the Liberal win, holding at near three-month highs.
Canada's economy, however, has been on a general upswing in 2019. The Canadian dollar has been the best-performing G10 currency this year, rising more than 4 per cent against its US counterpart, as the economy added jobs at a robust pace and inflation stayed closed to the Bank of Canada's 2 per cent target.
MORE REPORTS