Speaking at the World Economic Forum’s India Economic Summit (IES19) minister of commerce and industry and railways Piyush Goyal said a trade deal is more than mere trade in commodities and should be seen as something that adds value for both partners, both in the long run and the short term. 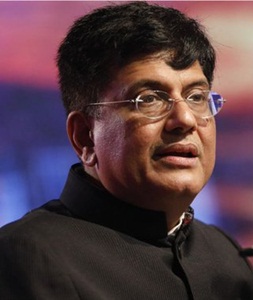 "The torrid times in our relations could also be something like a torrid love affair," Goyal said. He said the leaders of both India and the US get along well and, most importantly, understand each other, adding that relations between the two countries have been better than ever.
Despite the atmospherics and bonhomie of `HowdyModi’ there still are issues that hold up even a limited trade deal between India and the US. For two countries that are seen as natural strategic allies, India and the US have had trouble forging a bilateral trade agreement, Rahul Kanwal of India Today News, who is moderator said at the start of the session.
Representing the Indian government is Piyush Goyal, minister of commerce and industry and minister of railways while the United States is being represented by secretary of commerce Wilbur L Ross.
"Neither government said there would be a trade deal in five minutes," secretary Ross said. But, he added: "We do think there's no structural issue why there can't be one very quickly."
We are concerned with trade deficits that arise when countries throw up protectionist trade barriers, Secretary Ross said of the US desire to bring down its deficit. But he also noted that the country is committed to bilateral trade agreements as the most efficient and effective approach to trade.
Protecting small retailers from international e-commerce is a "question of proportionality", Secretary Ross said, adding that he believes India will be able to sustain a balancing act between the two.
Goyal, on his part, said India was not opposed to e-commerce, but needed to protect smaller firms, noting there would always be "political imperatives" - highlighting a potential sticking point in US-India trade negotiations.
While the discussions between the USA and India are progressing very smoothly and in the same spirit of understanding, Goyal  said India doesn’t change rules midway for the sake of commerce.
But he said not only has India moved beyond "back-breaking inflation" and tackled corruption, India is also on track to be the most honest country to do business with.
On another track, Secretary Ross said that US opposition to Huawei - and pressuring allies like India to not have the Chinese tech giant develop its 5G - was about security concerns, not about protectionism.
What India's extraordinary growth and future can teach global leaders
India and its diverse 1.3 billion population can become a $10-trillion economy in the next 15 years, he added.
Tennis player Sania Mirza said sports teaches young people how to deal with losses on a daily basis and find confidence. "More importantly, sport brings everybody together," she said.
She also noted the power of sports to facilitate gender equality.
"Equality comes from women believing they are equal. A lot of women in this part of the world believe maybe they are second-rate citizens...[but] once women start believing in themselves...women can rule the world," she said.
Switching tracks, Deputy PM Heng commented on the ongoing trade war between the world's two largest economies: "I do hope there can be some agreement between the US and China," he said, noting that all countries, including Singapore, were being negatively impacted.
"It will disrupt the global supply chain very significantly," he said. But he also called for better global governance to address common challenges and strengthen international trade rules.
This year’s co-chairs open the India Economic Summit 2019 by sharing their perspective on the theme: Innovating for India: Strengthening South Asia, Impacting the World.
This year’s summit will also focus on collaboration between South Asia and ASEAN, and the co-chairs will share their perspectives on how these links can be strengthened.
And with trade between ASEAN and India alone worth nearly $100 billion in 2018-19, there are already strong links to build on.
MORE REPORTS