FinEst Bay Area Development, a Chinese-funded Finnish company working on an undersea tunnel project linking the Estonian capital of Tallinn with Finland’s capital Helsinki, today said it will work with three Chinese companies on the final design and building of the 100-km tunnel, which forms part of Beijing’s Belt and Road initiative. 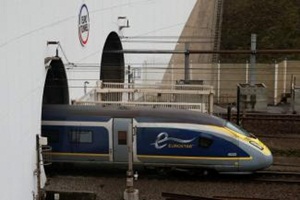 FinEst Bay Area Development had signed a memorandum of understanding for 15 billion euros ($16.8 billion) with China’s Touchstone Capital Partners for financing its undersea high-speed rail tunnel project linking Helsinki with Tallinn.
FinEst Bay Area Development said it signed a memorandum of understanding with China Railway International Group, China Railway Engineering Company, China Communications Construction Company, and financier Touchstone Capital Partners.
“The partner companies are the largest in the world in their own fields of expertise,” said Peter Vesterbacka, co-founder of Finest Bay Development company, adding that Finland and Estonia have limited resources in tunnel boring and high-speed train technologies.
One-third of the funding will come as a private equity investment - giving Touchstone a minority stake in the project - and two-thirds will be debt financing, it said.
“Financial details will be negotiated over the next six months,” FinEst Bay Area said in a statement.
The project, once completed, would help cut down travel time between the two capitals to 20 minutes from the 3-hour ferry ride at present. Finland and Estonia have for years considered linking their capitals, which are divided by the Gulf of Finland.
It would also bolster Beijing’s Belt and Road initiative that seeks to link China by sea and land with southeast and central Asia, the Middle East, Europe and Africa, through a network along the lines of the old Silk Road as well as through an Arctic route.
A 2017-published feasibility study commissioned by the two governments said the planned tunnel could open in 2040 but the builders said it could be built by the end of 2024, with some parts opening already before.
The project is yet to secure backing from the two governments.
Following a meeting with one of the heads of a consortium in charge of developing the undersea tunnel connecting Tallinn and Helsinki, Tallinn City Council Chairman Tiit Terik said the planned tunnel would benefit all of Estonia.
MORE REPORTS