Prime Minister Narendra Modi has stressed that the centre, state government, industry and the general public should take up collective responsibility for achieving short term and long term goals. Modi said the goal to make India a $5 trillion economy by 2024, is challenging, but can surely be achieved with support from states as well. 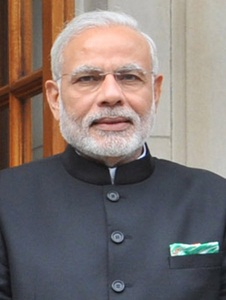 He said states should recognise their core competence, and work towards raising GDP targets right from the district level.
Noting that the export sector is an important element in the progress of developing countries, he said both the centre and the states should work towards growth in exports, in order to raise per capita incomes. He said there is immense untapped export potential in several states, including the North Eastern states. He said a thrust on export promotion at the state level will provide a boost to both income and employment.
Describing water as an important element for life, the prime minister said that the poor bear the brunt of insufficient water conservation efforts. He said that the newly created Jal Shakti ministry will help provide an integrated approach to water. He urged states to also integrate their efforts towards water conservation and management. He said management of available water resources is a vital imperative.
He said the aim is to provide piped water to every rural home by 2024, adding that attention has to be given to water conservation, and raising the water table. He appreciated the efforts made by several states towards water conservation and management. He said rules and regulations, such as model building bye-laws, also need to be framed for water conservation and management. He added that district irrigation plans under the PM KrishiSinchaiYojana should be implemented carefully.
The prime minister called for effective steps to tackle drought. He said the spirit of per-drop, more-crop needs to be promoted.
The economy expanded 5.8 per cent in January-March, its slowest pace in 17 quarters - falling behind Chinese growth for the first time in nearly two years.
Output in India’s agricultural sector dropped 0.1 per cent in the March quarter from a year ago.
Modi on Saturday announced the creation of a high-powered committee on reform in agriculture. As India depends on monsoon rains for the irrigation of most of its vast farmland area, Modi called for steps to tackle droughts.
About 54 per cent of India’s groundwater wells are declining, and 21 major cities are expected to run out of groundwater as early as next year, posing a threat to food security, according to the NITI Aayog report.
Modi last week wrote a letter to village heads urging them to join hands to construct check dams and embankments along river and streams, and building reservoirs among other measures to tackle the water crisis.
Reiterating the union government's commitment to double incomes of farmers by 2022, he said this requires focus on fisheries, animal husbandry, horticulture, fruits and vegetables. He said the benefits of PM-KISAN - KisanSammanNidhi - and other farmer centric schemes should reach the intended beneficiaries well within time. Emphasising the need for structural reform in agriculture, the prime minister also spoke of the need to boost corporate investment, strengthen logistics, and provide ample market support.
He said the food processing sector should grow at a faster pace than food production.
Turning to aspirational districts, the Prime Minister said out-of-the-box ideas and innovative service delivery efforts in some of these districts have delivered outstanding results.
On the health sector, the prime minister said there are several targets to be achieved by 2022. He also mentioned the target of eliminating TB by 2025. He urged states that have not implemented PMJAY under Ayushman Bharat so far to come onboard this scheme at the earliest. He said health and wellness should be the focal point of every decision.
The prime minister said that the country is moving towards a governance system characterised by performance, transparency and delivery where proper implementation of schemes and decisions are vital. He called upon members of the governing gouncil of NITI Aayog to help create a government setup which works, and has the trust of the people.
MORE REPORTS