British Prime Minister Theresa May today announced her resignation as leader of the ruling Conservative Party, following a failed Brexit deal, paving the way for the choice of a new prime minister on 7 June. 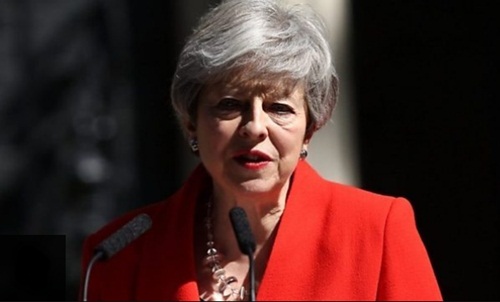 In an emotional statement from Downing St, she said, “I had done my best" to honour the 2016 EU referendum result. Theresa May said the failure to deliver Brexit was a matter of "deep regret."
The prime minister said it was “the honor of my life” to serve “the country that I love” as she announced she would step down after failing to get Brexit through Parliament.
May said she will step down as Tory leader on 7 June and a leadership contest is due to begin the following week, adding that she will continue to serve as prime minister while a Conservative leadership contest takes place.
The prime minister has faced a backlash from her MPs against her latest Brexit plan, which included concessions aimed at attracting cross-party support.
Andrea Leadsom quit as Commons leader on Wednesday saying she no longer believed it would "deliver on the referendum result".
May met home secretary Sajid Javid and foreign secretary Jeremy Hunt at Downing Street on Thursday where they are understood to have expressed their concerns about the bill.
In her statement today, she said that in order to deliver Brexit, her successor would have to build agreement in Parliament. "Such a consensus can only be reached if those on all sides of the debate are willing to compromise," she added.
May’s departure will deepen the Brexit crisis as a new leader is likely to want a more decisive split, raising the chances of a confrontation with the EU and a potentially unpredictable snap parliamentary election.
Theresa May who was elected prime minister following the exit of David Cameron, remained as British Prime Minister for nearly three years. She had earlier served as home secretary for six years.
May failed to win 2017 general election outright, but stayed PM.
As prime minister she oversaw the 2016 EU referendum, and Brexit dominated her time at 10 Downing Street.
May said she had done "everything I can" to convince MPs to support the withdrawal deal she had negotiated with the European Union but it was now in the "best interests of the country for a new prime minister to lead that effort".
May's voice shook as she ended her speech saying: "I will shortly leave the job that it has been the honour of my life to hold.
"The second female prime minister, but certainly not the last.
"I do so with no ill will, but with enormous and enduring gratitude to have had the opportunity to serve the country I love."
Labour Leader Jeremy Corbyn said she had been "right to resign" and that the Conservative Party was now "disintegrating".
Foreign secretary Jeremy Hunt said she was a "true public servant":
“I want to pay tribute to the PM today. Delivering Brexit was always going to be a huge task, but one she met every day with courage & resolve. NHS will have an extra £20bn thanks to her support, and she leaves the country safer and more secure. A true public servant,” @Jeremy_Hunt,” he said in a tweet
Andrea Leadsom, who quit on Wednesday, said the prime minister's speech had been "very dignified".
“A very dignified speech by @theresa_may. An illustration of her total commitment to country and duty. She did her utmost, and I wish her all the very best,” — Andrea Leadsom MP (@andrealeadsom) May 24, 2019”
With her Brexit deal stymied by too many of her own MPs, she tried to reach out across the Commons.
But in proposing a vote on a referendum - even though she expected MPs to reject another public vote - she over-reached.
Some members of her cabinet who are manoeuvring to replace her withdrew their consent from her latest plan, effectively throwing out its compromises and her leadership.
In a hung parliament, it remains to be seen whether the next Conservative leader will be able to succeed where she failed, or whether something more radical will be required: no deal, a new referendum, or a general election.
MORE REPORTS