The European Central Bank on Thursday decided to keep policy interest rates unchanged in order to give a fresh round of monetary stimulus and shore up sagging economy. 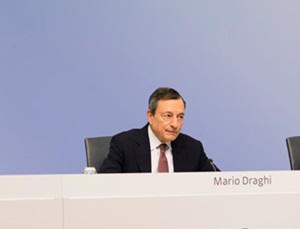 The ECB governing council at its meeting on Thursday decided to keep the interest rate on the main refinancing operations and the interest rates on the marginal lending facility and the deposit facility unchanged at 0.00 per cent, 0.25 per cent and (-) 0.40 per cent, respectively.
The decision comes on the back of the slowest growth forecast for the euro zone since the start of ECB’s quantitative easing programme four years ago.
ECB President Mario Draghi said the euro-zone economy will now expand only 1.1 per cent this year, a drop of 0.6 percentage point from forecasts just three months ago. A package of assistance from new loans for banks to a longer pledge on record-low rates is intended to expand existing stimulus, he said.
The governing council now expects the key ECB interest rates to remain at their present levels at least through the end of 2019, and in any case for as long as necessary to ensure the continued sustained convergence of inflation to levels that are below, but close to, 2 per cent over the medium term.
The ECB said it intends to continue reinvesting, in full, the principal payments from maturing securities purchased under the asset purchase programme for an extended period of time past the date when it starts raising the key ECB interest rates, and in any case for as long as necessary to maintain favourable liquidity conditions and an ample degree of monetary accommodation.
The bank proposed a new series of quarterly targeted longer-term refinancing operations (TLTRO-III), starting in September 2019 and ending in March 2021, each with a maturity of two years.
Under the new facility, counterparties will be entitled to borrow up to 30 per cent of the stock of eligible loans as at 28 February 2019 at a rate indexed to the interest rate on the main refinancing operations over the life of each operation. Like the outstanding TLTRO programme, TLTRO-III will feature built-in incentives for credit conditions to remain favourable.
These new operations will help to preserve favourable bank lending conditions and the smooth transmission of monetary policy, the ECB added.
MORE REPORTS