British Prime Minister Theresa May's government suffered a defeat in parliament on Tuesday when a majority of lawmakers voted against exiting the European union without a deal, bringing fresh obstacles to a `no-deal Brexit’ under which Btitain will leave the EU without an accord. 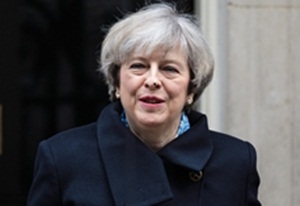 With support from just 296 MPs and a majority 303 voting against a no-deal Brexit, May’s government will now need explicit parliamentary approval to leave the EU. The government cannot also use powers relating to taxation law, placing the government in a tight spot.
The defeat in parliament, which comes ahead of a crucial vote on whether to approve the Brexit deal she has negotiated with the EU, places May in weak position as leader of a minority government, a divided party, and a critical parliament.
"This vote is an important step to prevent a no-deal Brexit. It shows that there is no majority in Parliament, the cabinet or the country for crashing out of the EU without an agreement," opposition leader Jeremy Corbyn of the Labour Party said.
The government downplayed the significance of its defeat.
"This amendment does not change the fact that the UK is leaving the EU on the 29 March, and it will not stop the government from collecting tax," a spokesman said.
"We will work with Parliament to make sure that the tax system works smoothly in all Brexit scenarios."
With less than three months for Britain to leave the EU, May is struggling to win approval for her Brexit deal.
While a no-deal exit is the default scenario if May's deal is rejected, some Brexit supporters say a no-deal exit is the only way to truly leave the bloc.
However, the prospect of possible supply chain disruption, medicine shortage and blocked ports, precludes the possibility of a no-deal exit from the 27-member economic union.
But, a majority of lawmakers from across the party lines are now opposed to a no-deal exit and are bent on making it harder for the government to leave without a deal.
MORE REPORTS