Russia in new stand-off with Ukraine over Sea of Azov

Russia on Sunday said it seized three Ukrainian naval vessels in a strait near Crimea, a part of Ukraine that ceded to Russia after a stand-off with Kiev, raising fears of a military confrontation between Moscow and West-backed Kiev. 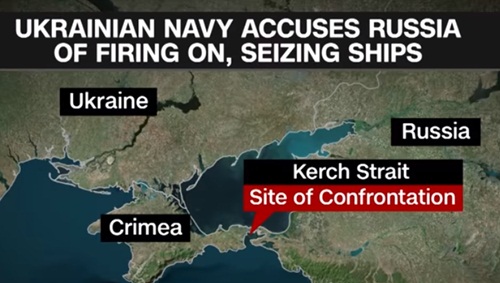 Ukraine's navy accused Russia of firing on its vessels in the Kerch Strait, a narrow waterway that gives access to the Sea of Azov that is used by Ukraine and Russia.
"In order to stop the Ukrainian military ships, weapons were used," Russia's FSB security service said, confirming that "three Ukrainian navy ships were boarded and searched."
Ukraine's navy said the incident took place as three vessels that included two small warships and a tugboat, headed through the strait for the port of Mariupol.
It said a Russian border guard vessel rammed the tugboat in "openly aggressive actions" and then fired on the ships, immobilising all three.
It also said the Kerch Strait was blocked by a tanker, and that Russian military aircraft were flying over the area.
Ukraine said six of its soldiers were injured, while the FSB reported only three had suffered non-life threatening injuries and were given medical treatment.
"Having breached this morning the Russian border, the three Ukrainian ships - the Berdyansk, the Nikopol and the Yani Kapu - tried again on 25 November at 19:00 (Moscow time) to conduct illegal actions in Russian territorial waters," the FSB said.
The FSB, which oversees the border guard service, also said the Ukrainian ships had failed to respond to the "legal demands" of the Russian authorities and that they were aiming "to create a conflict situation in this region."
In 2016, Russia launched a $3.7 billion bridge project to connect Crimea with mainland in southern Russia, making the Kerch Strait, the gate to the Azov, a conflict zone.
Kiev and its supporting Western powers condemned Russian moves. The European Union also, in late July, added six more Russian companies involved in the bridge project to its sanctions list.
In March, with the bridge nearing completion, Ukrainian authorities detained a Ukrainian-registered Crimean fishing vessel for illegally sailing under the Russian flag and arrested its captain and crew in the Sea of Azov - a move one Russian official likened to that of "Somali pirates."
Since then, Russia has stepped up confrontation in and around the Azov in a big way.
In early May, Russian border guards subordinate to the country's Federal Security Service (FSB) reportedly arrested a Ukrainian fishing vessel and its crew in the Black Sea, ostensibly for illegally fishing in what it said was Russia's exclusive economic zone.
The European Union issued a statement saying: "We expect Russia to restore freedom of passage at the Kerch strait and urge all to act with utmost restraint to de-escalate the situation immediately."
NATO in a statement also urged "restraint and de-escalation", and called on Russia "to ensure unhindered access to Ukrainian ports in the Azov Sea, in accordance with international law".
The confrontation at sea is a dangerous development in the long-running conflict pitting Ukraine against Russia and Russian-backed rebels in the east of the country.
"Russian special forces have taken over some ships", Ukrainian President Petro Poroshenko said after the latest conflict. He called a meeting of his military cabinet to evaluate and determine his country's next steps.
Ukraine's foreign ministry said it considered "these aggressive actions" a violation of international law that would be met with "an international and diplomatic legal response", and its envoy to the United Nations said on Twitter that the country will make an immediate appeal to the Security Council.
Russia for its part accused Kiev of illegally entering its waters and deliberately provoking a conflict. Moscow claims the waters off Crimea after annexing the peninsula in 2014.
Russian politicians accused Ukraine of acting at the behest of its Western allies and deliberately attempting to escalate the conflict.
Crimean leader Sergei Aksyonov wrote on Facebook that he "was sure the Western masters of the Kiev regime are behind this act of provocation".
Pyotr Tolstoy, deputy speaker of the Russian parliament, warned on Facebook that "the Ukrainian puppet authorities... are risking unleashing a large military conflict".
"One thing is clear: Russia won't allow military provocations in its territorial waters," he said.
Ukraine said it gave Russia advance warning of its ships' route, which its vessels are obliged to take to reach the Sea of Azov.
The latest incident comes after the Ukrainian navy in September complained of "acts of provocation" by Russian border guards against its ships taking the same route.
Ukraine has increased the number of its navy ships and border guard patrols in the Sea of Azov after Russia deployed five more warships there.
Kiev says its naval buildup is due to Russia stepping up controls in the area this year and carrying out lengthy checks on commercial shipping that were very costly for freight and port companies.
Kiev and the West have accused Moscow of deliberately blocking ships from accessing Mariupol, which has vital access to heavy industry in the region.
MORE REPORTS