A day after Sri Lanka’s Supreme Court overturned President Maithripala Sirisena's sacking of the country's parliament and ordered halt to the preparations for snap elections in the island nation, the Sri Lankan parliament today passed a no-confidence motion against newly appointed Prime Minister Mahinda Rajapaksa, giving a double blow to usurpers of power. 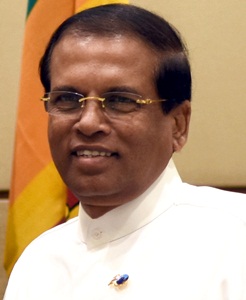 The Parliament now looks set for a show-down after deputies from Rajapaksa’s party rejected the voice vote as illegal, saying it wasn’t scheduled and that the pro-China former strongman would remain in office.
It wasn’t immediately clear what President Maithripala Sirisena, who triggered the crisis by firing Prime Minister Ranil Wickremesinghe and naming Rajapaksa to the job last month, propose to do now.
With no one to approve state projects, government officials are now confused as to who was in charge.
Sirisena dissolved parliament last week and ordered elections to clear way for his nominee Rajapaksha but the Supreme Court ordered a suspension of that decree until it heard petitions challenging the decree as unconstitutional.
Wickremesinghe, who had refused to vacate the prime minister’s residence, said he intended to discharge his official responsibilities now that he had proved his majority in parliament.
Speaker Karu Jayasuriya said the no-confidence vote against Rajapaksa was supported by 122 members of the 225-member house.
“A majority voted in favour of the no-confidence motion and thus the no-confidence motion was passed,” Jayasuriya said in a statement.
But Rajapaksa’s son Namal, who is also an MP, said the vote had not been put on the day’s business and hence was not valid. Father and son left the chamber before the vote was taken and their supporters shouted slogans in support.
MORE REPORTS