The world's longest sea bridge, the 55-km Hong Kong-Zhuhai-Macau Bridge that links the cities of Hong Kong and Macau to the Chinese mainland, will open for traffic tomorrow, but only to drivers with a special permit. 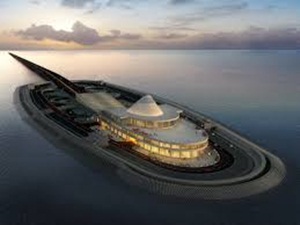 The bridge links Hong Kong’s Lantau Island to Zhuhai on the southern coast of Guangdong province and the gambling hub of Macau, a popular tourist spot for Chinese visitors, to the Chinese mainland.
The $20 billion Chinese project, which is part of a broader contentious plan to integrate the special administrative regions into China, is one of the most criticised initiatives in Hong Kong, where the bridge is seen as another way for Beijing to extend its control.
In Hong Kong, residents believe it is a poor use of taxpayer funds while conservationists blame the bridge construction for falling numbers of the threatened Chinese white dolphin. Others say the bridge is another way for Beijing to bind the autonomous administrative regions closer to China.
“The bridge is not just a mega transport infrastructure jointly built by Guangdong, Hong Kong and Macau,” Hong Kong’s secretary for transport and housing, Frank Chan Fan, said on Friday.
“The collaboration between Guangdong, Hong Kong and Macao in terms of trade, finance, logistics and tourism will be strengthened. Hong Kong will assume a more proactive role in the development of the Greater Bay Area.”
Chinese president Xi Jinping is reportedly planning to attend the official opening of the Hong Kong-Zhuhai-Macau bridge on Tuesday.
Officials are billing the 55km bridge as a key part of the Greater Bay Area plan, a campaign to connect Hong Kong and Macau to 11 Chinese cities to form a high-tech region to rival Silicon Valley.
Private cars will only be able to use it after applying for a special permit. The crossing will mostly be used by private shuttle buses and freight vehicles. The bridge is not served by public transport.
Under construction since 2009, the structure is supported by three cable-stayed bridges and designed to withstand winds of up to 340km an hour. A 6.7km undersea tunnel has been built to avoid disrupting shipping lanes, connected by two artificial islands.
Towers above the bridge are designed to look like dolphins, in honour of the white dolphin, Chinese knots and a boat’s mast, according to the bridge’s designer. The curves of the road are meant to resemble a snake.
MORE REPORTS