Nearly a week after counting in the presidential election was over on Sunday last and Maladives’ election commission released "interim results" on 24 September, the commission on Saturday declared opposition's Ibrahim Mohamed Solih president-elect. 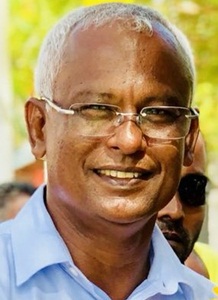 The election commission, which earlier pushed back the official outcome of the September 23 polls to allow legal challenges over the vote's conduct, said on Saturday that they had been pressured to delay the final announcement of strongman Abdulla Yameen's decisive loss.
Solih, the common opposition candidate, won the election with 58.4 per cent of the ballot, or 134,705 votes, election commission chief Ahmed Shareef confirmed. This has come as a shock to Yameen, who expected the election commission and the military to find a way for him to retain leadership position.
Election authorities say they had been pressured to delay the final announcement of strongman Abdulla Yameen's decisive loss.
The commission termed the results released on Monday as "interim results", but the official outcome of the 23 September polls was pushed back to allow legal challenges over the vote's conduct.
"We received a lot of threats to delay the announcement following baseless accusations," Shareef said on Saturday in Male, the capital of the Indian Ocean archipelago.
"There were more than 400 complaints, but none of them were deemed to have changed the outcome," he added.
Outgoing president Yameen, who jailed or exiled most of his rivals during his turbulent five-year term, took just 96,502 votes or 41.6 per cent, Shareef said.
Scores of Yameen's supporters had lodged complaints saying that they and other voters had not been allowed to cast their ballot.
However, nearly 90 per cent of the electorate of 262,135 turned out to vote, according to the official results.
Private election monitors had warned that the electoral process was heavily weighted in favour of the incumbent, but the final results showed huge support for the opposition.
Solih had the backing of four opposition parties, three of which had supported Yameen in a controversial 2013 run-off that saw the country's first democratically elected leader Mohamed Nasheed lose narrowly.
Solih is set to be sworn in on 17 November when Yameen's term comes to an end.
There is still speculation that Yameen could try to hold on to power under some pretext or the other.
Yameen, who declared a state of emergency in February and arrested top judges and his political opponents to thwart moves against him during his hardline rule, dented the Maldives' image as a honeymoon paradise and caused alarm to be raised abroad.
Yameen has now freed five political prisoners except his estranged half brother Maumoon Abdul Gayoom and scores of his supporters.
MORE REPORTS