Maldivian joint opposition presidential candidate Ibrahim Mohamed Solih has won the election defeating President Abdulla Yameen who is known to be close to China, in a big relief to India. 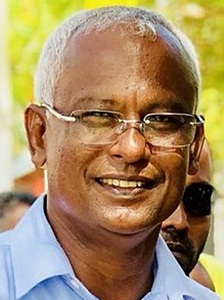 While the final results are yet to be declared, Abdulla Yameen conceded defeat and said he would arrange a smooth transition for president-elect Ibrahim Mohamed Solih.
"The Maldivian people have decided what they want. I have accepted the results from yesterday," Yameen said in a televised address to the nation a day after the joint opposition candidate secured an unexpected win.
"Earlier today, I met with Ibrahim Mohamed Solih, who the Maldivian electorate has chosen to be their next president. I have congratulated him," Yameen said.
India congratulated president elect Solih on his victory and said the election reflected Maldive’s commitment to the values of democracy and the rule of law.
The Election Commission of Maldives has declared opposition candidate Ibrahim Mohamed Solih as the winner of the presidential elections in the country after releasing the preliminary results.
The commission's results released today show Solih scored 134,616 votes and incumbent President Yameen Abdul Gayoom 96,132 votes.
The results show 89.2 per cent voter turnout.
Commission spokesman Ahmed Akram said the final results will be released within the seven-day window parties have to challenge the results in court.
Solih declared victory early today, although his win was unexpected, with opposition members fearing Yameen would rig the vote in his favour.
In a victory speech in Maldives' capital Male, Solih called it "a moment of happiness, hope and history".
"I call on Yameen to respect the will of the people and bring about a peaceful, smooth transfer of power," Solih said on national television shortly after official results showed he had an unassailable 58 per cent of the popular vote.
"The message is loud and clear. People want justice and stability and we will ensure accountability," he added.
Yameen, however, has not conceded the race. Spokesman Hussain Shihab said he is awaiting a briefing by top Yameen administration officials before making a statement.
Since his election in 2013, Yameen has cracked down on political dissent, jailing rivals and judges.
India hoped that the Maldivian Election Commission will officially confirm the result at the earliest.
“We welcome the successful completion of the third presidential election process in the Maldives which, according to preliminary information, Ibrahim Mohamed Solih has won,” the ministry of external affairs (MEA) said.
“We heartily congratulate Ibrahim Mohamed Solih on his victory and hope that the Election Commission will officially confirm the result at the earliest,” it said.
“This election marks not only the triumph of democratic forces in the Maldives, but also reflects the firm commitment to the values of democracy and the rule of law,” the MEA said.
India’s ties with the Maldives have been strained after President Yameen declared Emergency in the country on 5 February, following an order by the country’s Supreme Court to release a group of opposition leaders, who had been convicted in illegitimate trials.
India and several other countries had criticised the Yameen government for the imposition of the Emergency and had urged it to restore the credibility of the electoral and political process by releasing political prisoners.
The Emergency was lifted 45 days later.
In July, India expressed concern over announcement of the presidential election without allowing democratic institutions, including Parliament and the judiciary, to work in a free and transparent manner.
At the last election in 2013, the Supreme Court annulled the result after Yameen trailed former president Mohamed Nasheed, giving Yameen time to forge alliances and win a second round of voting that was postponed twice.
Results from Sunday's election released by the electoral commission showed Yameen on 41.7 per cent of the vote, well behind Solih on 58.3 per cent — the only other name on ballot papers.
The final official result will take up to a week to be published.
The result was a major surprise, with Yameen's main political rivals either in prison or in exile, media coverage of the opposition sparse and monitors and the opposition predicting the vote would be rigged.
Yameen stayed quiet overnight after the outcome became clear. But signs grew Monday that he would throw in the towel, with a foreign ministry statement saying Solih had won and state media showing him claiming victory.
Nearly 90 per cent of the 262,000 electorate turned out to vote, with some waiting in line for more than five hours.
Celebrations broke out across the 1,200-island tropical archipelago popular with wealthy foreign tourists, with opposition supporters waving yellow flags of Solih's Maldivian Democratic Party (MDP) and dancing in the streets.
The US State Department, which had warned of "appropriate measures" if the vote was not free and fair, had called on Yameen to "respect the will of the people".
MORE REPORTS