Australia got a new prime minister, Scott Morrison, after an overnight revolt within the centre-right Liberal Party on Friday ousted Malcolm Turnbull as prime minister. 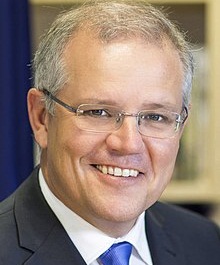 Morrison, who was the country’s treasurer and earlier entrusted with Australia’s controversial “stop the boats” asylum seeker policy, was sworn in as prime minister after he emerged a surprise winner of a three-way challenge.
Although Morrison did not start the week-long leadership revolt against Turnbull, he will now be tasked with bringing some stability back to the Liberal Party and stave off the center-left Labor Party in the next federal elections due in May 2019.
Morrison will be Australia's fifth prime minister in so many years and the sixth in less than 10 years, will lead a coalition between the Liberal and National parties with a one-seat majority. He will have to be retain that seat in a by-election for the Sydney seat that Turnbull is set to vacate.
Morrison promised to bring together the divided Liberal Party and end an internecine battle that has scarred the conservative government in the run-up to the election.
“Our job...as we take forward this mantle of leadership as a new generation, is to ensure that we not only bring our party back together, which has been bruised and battered this week, but that...we bring the Parliament back together,” Morrison said in his first appearance after his party-room victory.
“The new generation of Liberal leadership is on your side,” he told Australian voters after he was sworn into office shortly after 6 PM (0800 GMT) on Friday.
Morrison is widely seen as a centrist and has rejected prominent right-wing policies, including limits on immigration. “He is the compromise candidate, a bridge between the conservative and moderate wings of the party,” reports quoted Haydon Manning, a political science professor at Flinders University in South Australia state, as saying. “He can heal the wounds that threatened to fracture the coalition government and allow the government time to prepare for an election,” he said.
Morrison faces a series of policy decisions that could reopen old wounds within the government, including an impasse on energy, a topic that acted as a catalyst in Turnbull's demise.
Turnbull blamed the coup on “vengeance, personal ambition, factional feuding” in his party, led by conservative lawmakers, including former Prime Minister Tony Abbott, whom he toppled in a similar coup in September 2015.
“Australians will be dumbstruck and so appalled at the conduct of the past week,” said Turnbull. Liberal party member Warren Entsch said after the leadership vote, “This revolving door of prime ministers has got to stop.”
Australia is one of the world’s biggest energy exporters, but its energy infrastructure is shaky at home, and the country is struggling with how to adapt and implement policies to tackle climate change.
These so-called “energy wars” escalated in recent days when Turnbull introduced a modest energy bill opposed by hardline conservatives in his own party.
Opposition had contested the limits that Australia had agreed on greenhouse gas emissions, which were more or less in line with Australia’s commitments to the Paris climate agreement.
Turnbull backed down on the emissions portion, opening the threat of revolt within his party. Turnbull failed to hold on in the face of restive conservatives. There was no major political scandal or crisis, though.
Forecasts are now in favour of Labour, which is expected to gain control with the next election.
MORE REPORTS